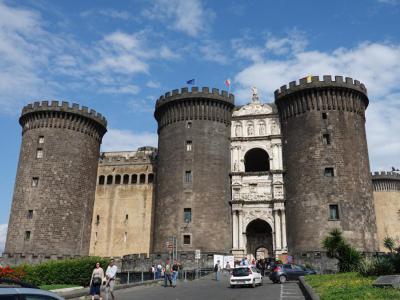 The New Castle is not new, it is a large medieval castle first built in 1279. Its scenic location and imposing size make the castle one of the main architectural landmarks of the city. It was a royal seat for kings of Naples, Aragon and Spain until 1815.

Commissioned by Charles I of Anjou and built between 1279-82 as the royal residence after the capital of the Sicily Kingdom shifted from Palermo to Naples, it became the venue for all important events during the rule of the Angevin dynasty. The Spanish Aragon dynasty that ruled Naples after the Angevins improved the structure and used it both as a royal residence and a military fortress. The marble entrance arch was created by sculptors from Catalonia in Spain to celebrate the beginning of the Aragonese rule of Naples.

The New Castle has housed the Neapolitan Society of National History since 1875 and the Civic Museum that contains works of art from churches around Naples. It is open for public viewing and managed by the Naples Ministry of Culture. Among the things to see are a display of weapons in the armory hall and the Palatine or Saint Barbara chapel located within the castle. Cultural events and exhibitions are held at the two levels of the southern courtyard and at the Charles V Hall and the Salla della Loggia inside the castle.

The castle is truly breathtaking when observing it from outside. Massive and beautiful, it can really impress. Make sure to visit the excavations underground and also take the elevator/stairs to the top, where the city view is extensive.

Tip:
If you go, it is highly recommended that you join a guided tour, if you want to make most of your visit - the small extra fee is worth it.