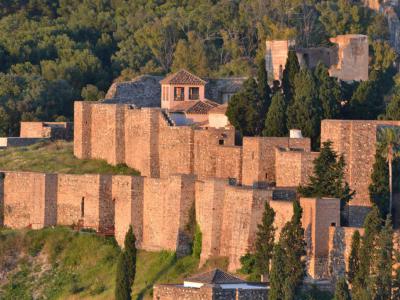 This castle is an ancient fortress resting on top of the Gibralfaro Hill. The peak is 131 meters high and offers spectacular views of the city of Malaga and the Mediterranean Sea. The image of the structure is depicted on the seal and flag of Malaga City.

The Moors erected the fortress near an old lighthouse constructed by the Phoenicians. The name Gibralfaro comes from 'gabel' which means rock in Arabic and 'faro' meaning lighthouse in Greek. Abd-al-Rahman III, the Caliph of Cordoba commissioned the construction of a castle at the site. Yusef I, the Sultan of Grenada, built additional structures including a walled passage that connects the castle with the Alcazaba, in the 14th century.

The Christian monarchs, Ferdinand and Isabella, laid siege to the castle for three months. The siege ended only when hunger forced the Moorish armies to surrender. This was the first time that both armies used gunpowder. After victory, Ferdinand stayed at the castle while Isabella remained in the city.

Today visitors can reach the castle by bus, taxi or by climbing the steps to the summit. They can only see the ruins of the castle and the mosque that once stood at the location. There are several bread ovens and wells within the property. The old gunpowder room now houses an information center and there is a small one-room museum with exhibits that tell the once glorious tale of the castle.

Why You Should Visit:
Excellent attraction not just for history buffs but for anyone wanting to get the best views of this beautiful city and the sea.
Another advantage of starting any historic endeavor at this castle is that you are then able to work your way down the hill (public footpath) to the next phase of historic attractions.

Tip:
The site is perhaps best experienced by walking around the walls which can sometimes be high and often unprotected, as well as narrow – so do be patient and do take care. Taking young children onto the walls is not a very good idea, or if you do, make sure to permanently hold on to them... and tightly.