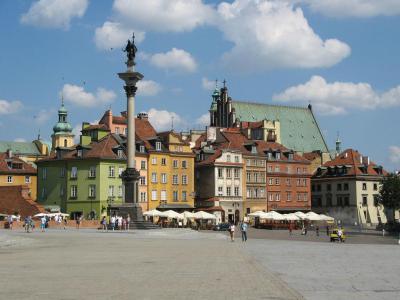 Located in the middle of Old Town, this square was first built in 1821. It's roughly triangular, with one side facing the Royal Castle.

One of the most prominent features of the square is Sigismund's Column, a 17th-century monument to King Sigismund III. It was built in 1644 and is the world's oldest secular column built in modern history. It's a landmark that you can't miss.

One of Warsaw's biggest highways runs underneath Castle Square. Besides the castle, the rest of the square is surrounded by historic townhouses. This is the center of exploration in Warsaw—it's a meeting point for locals and tourists alike, and it's full of life. There are street musicians, horse carriages, churches, and restaurants all around. The main attraction here, though, is the Royal Castle.

Castle Square also marks the northern point of the Royal Route, which led from the castle southward to King Jan III Sobieski's personal residence at Wilanów. Along that route, you'll pass many must-see Warsaw sights.
Image by Filip Maljković on Wikimedia under Creative Commons License.