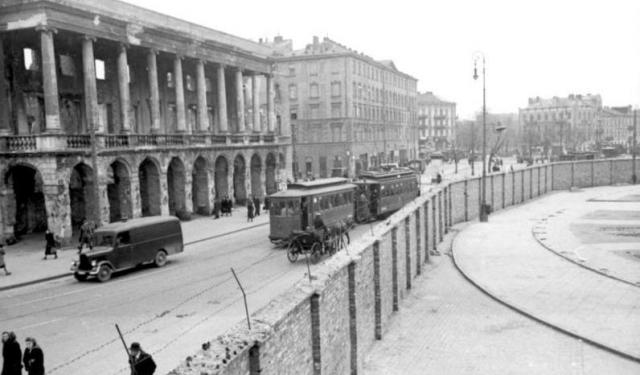 It's hard to imagine, except what we know from history, that on these beautiful Warsaw streets, thousands of Jews were herded and forced into cattle cars, on their way to concentration camps in the 1940s. Here, in the location of one of Europe's biggest concentration camps, about 400,000 innocent Jews suffered and died. Take this self-guided walking tour to visit some of the places that commemorate the Holocaust.
Image Courtesy of Knobloch, Ludwig.
How it works: Download the app "GPSmyCity: Walks in 1K+ Cities" from iTunes App Store or Google Play to your mobile phone or tablet. The app turns your mobile device into a personal tour guide and its built-in GPS navigation functions guide you from one tour stop to next. The app works offline, so no data plan is needed when traveling abroad.

The tragic history of Polish Jews who perished during the Holocaust is shared at the Umschlagplatz Monument. Umschlagplatz, a German word meaning "collection point," is the location where Jews from Warsaw were held to be taken to Nazi death camps.

Visitors to Warsaw can observe the Umschlagplatz Monument at the end of the Memorial Route of Jewish Martyrdom and Struggle. It is engraved with the 448 most popular Jewish names, which are meant to represent the Jews who were sent to Treblinka, and then murdered at the hands of Nazis. The Umschlagplatz Monument honors their memories with its design, which represents the colors of Jewish ritual robes.

The monument was completed in 1988 and unveiled on the 45th anniversary of the beginning of the Ghetto Uprising. It includes two inscriptions that commemorate the lives lost and include a verse from the Book of Job in Polish, Hebrew and Yiddish.

2) POLIN Museum of the History of Polish Jews (must see)

The POLIN Museum of the History of Polish Jews opened in 2013. The museum focuses on Jews in Poland from the Middle Ages through present day. It has a strong focus on the Holocaust, but it covers more than 1000 years of Jewish history.

The core exhibition has eight galleries that include artifacts and information detailing the arrival of Jewish people, their settlement and their culture. There are interactive exhibits, films, artwork and photos that work together to provide a narrative history.

Rotating exhibits vary. They often focus on visual art, photography and history. These temporary exhibits are sometimes on display for as long as six months or as short as only a few weeks. Thanks to the broad range of rotating exhibits and the importance of the core exhibition, the POLIN Museum of the History of Polish Jews received the European Museum of the Year Award in 2016.

The museum is located on the site of the former Warsaw Ghetto. It was designed by architects Rainer Mahlamäki and Ilmari Lahdelma in a Postmodern Architectural style using concrete, copper and glass. The imposing, box-shaped building stands in contrast to the surrounding green space where it sits. The award-winning building is illuminated at night in multiple colors.

3) Monument to the Ghetto Heroes

Only a couple of blocks away from the Umschlagplatz Monument is the Monument to the Ghetto Heroes. This monument commemorates 1943's Warsaw Ghetto Uprising. It is located on the grounds of the POLIN Museum of the History of Polish Jews in the same area where the uprising took place.

The Monument of the Ghetto Heroes was erected in 1948. It was sculpted by Nathan Rapaport under the direction of Leon Suzin. This monument expanded upon Suzin's earlier work, which was a small, circular plaque placed in the same location only two years earlier.

The Monument to the Ghetto Heroes is built in the form of a 36-foot wall. It is meant to represent both the uprising and the Western Wall in Jerusalem. The monument is adorned with busts of citizens holding Molotov cocktails and Jewish people being persecuted by Nazis. It also includes the image of the leader of Zydowska Organizacja Bojowa (ZOB), Mordechai Anielewicz.

Tourists can view this monument as part of a walking history tour of Poland or during their visit to the POLIN Museum of the History of Polish Jews. As it is an outdoor monument facing a public street, there is no admission and visitors can view the monument at any time.
Image Courtesy of Wikimedia and Pudelek.
4

The Jewish Historical Institute is a body that researches the history of Jews in Poland. The institute was founded in 1947.

Not all collections are open to the public. Some, particularly those that pertain to academic research, must be requested well in advance. However, there are public exhibits that patrons are welcome to view.

The Underground Archive of the Warsaw Ghetto is a permanent exhibit that displays documentation, letters and testimonies related to the Warsaw Ghetto. The House of Prayer replicates a traditional synagogue with artifacts dating to the 18th century. Though they survived World War II, many are damaged with battle scars incurred during that time.

The photography collection offers more than 40,000 photographs of Jewish people in Poland through the years. Artwork and temporary exhibits are regularly offered at the institute.

The only surviving pre-war synagogue in Warsaw is the Nozyk Synagogue. The building was erected in 1902 and, though damaged during World War II, it was restored and remains operational.

The synagogue was designed by Karol Kozłowski in the Neoromanesque architectural style. It was damaged during an air raid during the war in 1939. The building was further damaged when it was used as stables by German occupying forces.

Nozyk Synagogue was rebuilt and expanded in 1983. It is now used for religious ceremonies and gatherings. Visitors to Warsaw can find the synagogue near the Synagoga Ortodoksów.
Image Courtesy of Wikimedia and Emmanuel Dyan.
6

The Janusz Korczak Monument was erected in honor of educator and author, Janusz Korczak. Korczak was a well-known author of children's books who later took over as principal at an orphanage for Jewish children. During the Holocaust, Korczak was offered the opportunity to escape. However, he refused to leave the orphans behind and instead accompanied them to the Treblinka extermination camp and was not heard from again.

The monument shows Korczak with some of his pupils. It is erected at the site of the orphanage in what was formerly the Warsaw Ghetto. Though plans for the monument were underway in 1999, it wasn't completed and unveiled until 2006.

Visitors can find the monument in Świętokrzyski Park near the Palace of Culture and Science. Tourists who want to see other statues and monuments honoring Korczak can find them through Warsaw. A commemorative grave in the Jewish ceremony also holds important meaning to those wishing to honor Korczak's legacy.
Image Courtesy of Wikimedia and DocentX.
7

In the hard and terrible times of 1940, the Nazis created the Warsaw Ghetto, by building 18 km (11 miles) of brick walls around the Jewish quarter. The construction of the ghetto wall started on April 1, 1940. The wall was typically 3 m (9.8 ft) high and topped with barbed wire. Escapees could be shot on site. The borders of the ghetto changed many times during the next few years.

After the end of World War II, the freestanding walls of the Jewish district, which survived the Ghetto Uprising and the Warsaw Uprising, were largely demolished. Fortunately, a few fragments of the walls running between the properties have been preserved so you still get a feeling for the hardship and suffering endured by the Jews, who were forced to live there.

Tip:
Go and find the few walls remaining between apartment blocks and, if you do, also find the only remaining synagogue that survived the war. Alternatively, consider visiting the POLIN Museum of the History of Polish Jews for more information.
Image Courtesy of Adrian Grycuk.