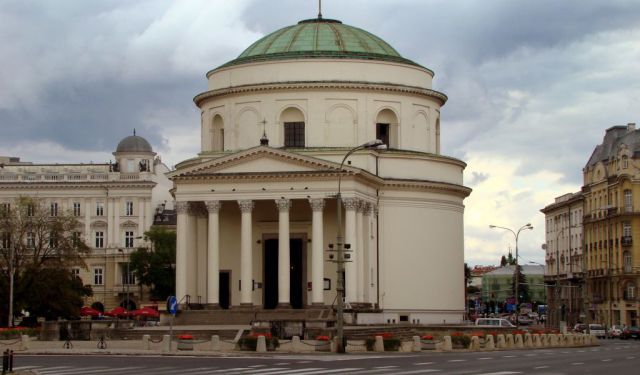 Poland is one of the most religious countries in Europe, so it is not surprising that Warsaw is home to many magnificent religious sites: centuries-old churches and cathedrals. Roman Catholicism has been the dominant faith in the country since the Baptism of Poland in 966. This self-guided walking tour takes you to see some of Warsaw’s most prominent places of warship.
Image Courtesy of Wikimedia and Szczebrzeszynski.
How it works: Download the app "GPSmyCity: Walks in 1K+ Cities" from iTunes App Store or Google Play to your mobile phone or tablet. The app turns your mobile device into a personal tour guide and its built-in GPS navigation functions guide you from one tour stop to next. The app works offline, so no data plan is needed when traveling abroad.

The Neoclassical St. Anne's Church is one of Warsaw's oldest buildings and most notable churches. Even though it has been rebuilt and reconstructed several times, its appearance has remained mostly unchanged since 1788.

The foundations were laid for the church back in 1454 when the Duchess of Masovia Anna Fiodorowna set it up for the Franciscan friars. In the 1700s, the facade was done in a Late-Baroque style. After suffering heavy damage in World War II, the church was restored between the late 1940s and 1970s.

The church impresses with its baroque style. It has a richly decorated interior that is full of beautiful frescoes. The only diamond vaulted ceiling is found here, in the cloister leading to the vestry. During the summer at noon, a 30 minutes organ concert is played every day except Sundays and holidays.

Inside the church, you will also find a simple wooden cross with an interesting history. The cross was built to commemorate the tragic loss of 96 lives in a 2010 Polish Air Force crash. The fatalities included the President of Poland, Lech Kaczyński, and his wife, Maria. The cross was displayed for a time at the Presidential Palace. However, the cross became a flashpoint in local politics, as it raised questions of the separation of church and state, religion, and Polish patriotism.

Why You Should Visit:
This church is completely painted from floor to ceiling with magnificent frescos. The illusions painted on the columns and walls are very beautiful.

Tip:
Try to schedule your visit around noon or 2pm to catch the daily organ concert (lasting 30 mins). It's also possible to climb to the top of the tower, which will earn you some impressive views over the city in a clear day.


Image Courtesy of Wikimedia and Kocio.
2

St. Martin's Church is a church in Warsaw. It is located on ulica Piwna ("Beer Street") in the Polish capital's Old Town. The facade is Baroque, although the interior is completely modern. The profuse early baroque furnishings, created in the 1630s by Jan Henel (sculptor of King Władysław IV Vasa), together with the rococo decorations done in the 1750s, was destroyed by the Germans in a bombing of the church during the Warsaw Uprising.

The church was ruined and was reconstructed after the World War II. Inside the church, at the end of right knave, sits a chapel of Our Lady of Consolation with a copy of a painting from the 15th century, and at the end of the left one - is the chapel of Jesus Christ. Next to the sanctuary there is a chapel of St. Francis with the most valuable element of the church's furnishing - a poly-chromed figure of the Virgin Mary with the Child.
Image Courtesy of Wikimedia and Carlos Delgado.
Sight description based on Wikipedia.
3

St. John's is one of three cathedrals in Warsaw, but the only one which is also an archcathedral. It is also one of Poland's national pantheons and stands immediately adjacent to Warsaw's Jesuit church. Along with the city, the church has been listed by UNESCO as of cultural significance.

Originally built in the 14th century in Masovian Gothic style, the Cathedral served as a coronation and burial site for numerous Dukes of Masovia. The Archcathedral was connected with the Royal Castle by an elevated 80-meter-long corridor that had been built by Queen Anna Jagiellonka in the late 16th century and extended in the 1620s. The church was rebuilt several times and preserved until World War II as an example of English Gothic Revival. Sadly, it was demolished during the Warsaw Uprising of 1944 but rebuilt after the war.

Why You Should Visit:
Not only is this, by itself, a beautiful building worth seeing, but it is also an important international centre to promote sacred music and its value certainly increases when you attend an organ concert (schedules can be found online).

Tip:
If you visit, make sure that your pictures are taken from the bottom up!
The small crypt can be viewed for a small fee, whereas the rest of the church is free.
Do wander through the tiny streets around the cathedral as they are atmospheric as well.

St. Hyacinth’s Church is a popular tourist attraction in Warsaw. This Baroque church was constructed between 1603 and 1639 by Dominicans. The exquisite structure with its pristine white interior was designed by a popular architect Joannes Italus.

The beautiful Chapel of St. Dominic was designed by Tylman Van Gameren, one of the greatest seventeenth century architects in Poland. The chapel adjoins the largest monastery in Warsaw and is one of the few parts of the church that survived the war.

This church enjoyed great prosperity in the eighteenth century. At that time, the richest collection of volumines in Poland was housed in the library at the monastery. It was however completely destroyed later.

Though the interior of the church is completely modern as none of the original furnishings were preserved, its façade is baroque. Some of the prominent tomb monuments you can find here include the tomb of Anna Tarnowska carved in the year 1616 in brown marble depicting the founder in a sleeping pose, the Kararzyna Ossoliska built in 1607 and the black marble epitaph of a rich Polish merchant from Krakow, Regina Sroczyska.

At the Chapel of St. Dominic, you can find the valuable and precious 18th century wooden statue of Ecce Homo. This statue was carved by Antoni Asiski. At the chapel, you can also find the grand altar in black marble, a porta and the exquisite stucco decorations.
Image Courtesy of Wikimedia and Jolanta Dyr.
Sight description based on Wikipedia.
5

5) Field Cathedral of the Polish Army

Field Cathedral of the Polish Army is one of the most popular Cathedrals in Poland. This garrison church is where most of the military religious celebrations are held. The church today is visited by locals and tourists from around the world.

This church is located opposite Krasinski square close to the old town. There is a chapel dedicated to the Katyn massacre victims. Field Cathedral of the Polish Army was built for the Piarist friars between seventeenth and eighteenth centuries.

In 1915, after the war, Russians left Warsaw. This church functioned as a depot for the German army and was used by them for a few years. It was restored to its former glory only after 1918 when Poland gained independence between 1923 and 1927.

Oskar Sosnowski reconstructed the Field Cathedral of the Polish Army. His designs were based on drawings of the 17th century. The church was again destroyed during the Warsaw Uprising by the Luftwaffe in the year 1944. It was only between 1946 and 1960 that it was rebuilt and restored to its present structure by a team of architects headed by Leon Marek Suzin. This church is definitely a must-visit on your trip to Warsaw.
Image Courtesy of Wikimedia and Guillaume Speurt.
Sight description based on Wikipedia.