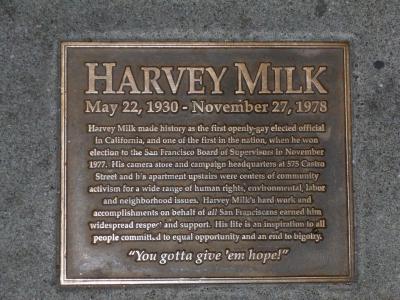 Castro Camera was a camera store in the Castro District of San Francisco, operated by Harvey Milk from 1972 until his assassination in 1978. During the 1970s the store became the center of the neighborhood's growing gay community, as well as campaign headquarters for Milk's various campaigns for elected office.

Milk, an avid amateur photographer, was disappointed over a developer ruining a roll of film. With his then-partner, Scott Smith, Milk opened the store in 1972, using the last $1,000 of their savings. The store soon became a focus of the growing influx of young gay people, who were coming from across the US to Castro District, where their sexual orientation was accepted.

Beyond selling cameras and film, Milk turned the store into a social center, and a refuge for new arrivals. He also made it an official polling station for San Francisco elections. Because he was so well known for his civic involvement promoting gay businesses and gay consumers, Milk soon became known unofficially as the "Mayor of Castro Street".

The location at 575 Castro Street, a Human Rights Campaign Store as of 2011, was recreated as a set for Milk, the biopic of Milk's life. The sparse set, carefully built to original detail including an old red couch and barber's chair, drew the attention of many local residents who remembered the original. The modern-day shop owner and film crew also described seeing a ghost at the store, whom they assumed to be Milk.

A metal plaque set into the sidewalk in front of the store memorializes Milk, and the location has been used as the stepping-off point for an annual memorial march on the date of his death.
Image by Zboralski on Wikimedia under Creative Commons License.
Sight description based on wikipedia