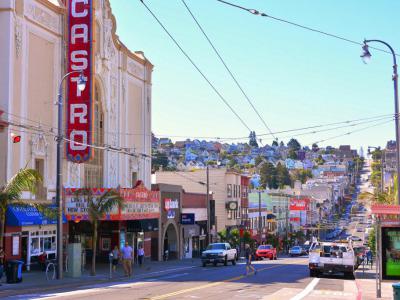 As a city, San Francisco is full of exciting places to visit. Be it museums, churches, parks, roads or pocket localities. And no visit to San Francisco can be deemed complete without visiting the Castro District- the gay neighbourhood of San Francisco.

Embedded with not only a rich history but also some of the city’s finest structures and homes, the Castro district is one of the most visited tourist places in San Francisco. The area was named after Jose Castro, a Mexican leader in California during the Mexican- American war of 1846-48. The neighbourhood was created in late 19th century after the Market Street linked it to the Eureka Valley.

The early settlers were mainly from Sweden, Finland, Norway and Denmark, which is why it was also nicknamed as “Little Scandinavia”. Today, glimpses of the Scandinavian style of construction can be appreciated in a number of buildings.

Castro District became the ‘gay locality’ during the Second World War, when many army servicemen were expelled on accounts of being gay. These ex-army men later came and settled in the Castro District and since then the area has been openly accepting people of varied sexual orientations. Along with being the first openly gay neighbourhood in America, today, the Castro District is also the world’s largest gay neighbourhood.
Image by Mike McBey on Flickr under Creative Commons License.
Sight description based on wikipedia