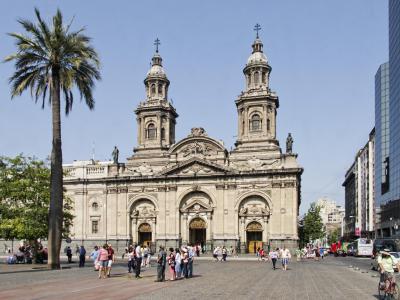 Santiago's Metropolitan Cathedral is one of the largest and most impressive churches in Chile. It was erected between 1748 and 1775, and its facade received its present neoclassical look from Joaquin Toesca. In 1879, towers were added to the structure and other modifications were made to the offices, the palace of the archbishop, and the cathedral’s façade.

The interior of the cathedral is magnificent with its three naves and splendid ceiling. Several urns in the nave, at its right, are said to contain the remains of Chilean cardinals, while the central nave features altar seats made of mahogany, and the main altar made of white marble in 1912 in Munich. The pulpits date back to the 16th century; the organ – to the 18th.

The third nave, to the left of the cathedral, has altars dedicated to St. Michael the archangel, and Santiago the Major, the city’s patron. The Holy Sacrament Chapel within the church is similar to Saint John's Chapel in Rome.

The Museum of Sacred Art is located close to Plaza de Quintana and was founded in the 19th century. The tomb of St. James was discovered on the very spot, on which the altar was built. There are also several paintings and sculptures, as well as religious ornaments.

Why You Should Visit:
Quite a majestic edifice indeed, with the solemnity that was sought after.
Well decorated inside, grand and massive from the outside – a good place to observe Catholic culture in Chile.

Tip:
Go early before most of the crowds arrive so that you can get some good photos (also the light is generally much better).