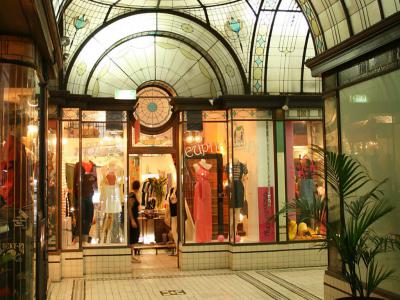 On the corner of Flinders Lane and Swanston Street, you'll find the historic Cathedral Arcade on the bottom floor of the Nicholas Building. There are a few shops and cafes, but the real attraction is the beautiful building itself and its architectural details. The leadlight archway and central domes were built in 1925. It's listed on the Victorian Heritage Register for its amazing art deco architecture and details.

The Nicholas Building was designed by Harry Norris and is one of the landmark buildings in Melbourne. It was finished in 1926 at the height of the art deco movement. The style of the building is often referred to as Commercial Palazzo or Chicago School. There are many classic elements in the terracotta facade, including giant ionic and Doric columns. Most of the building's tenants have traditionally been in creative industries, like fashion designers, commercial artists, and architects. You can access the building from inside the Cathedral Arcade. If you go on an Open Studio day, you will get a behind-the-scenes look at the artist's studios in the building.
Image by Mike Switzerland on Wikimedia under Creative Commons License.