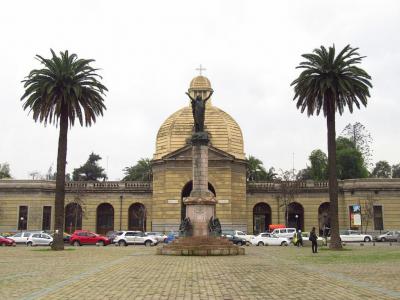 This eighty-five hectare expanse is a final resting place for all but two Chilean presidents as well as a number of notable Chilean citizens, including political leaders and poets. The area abounds in spectacular mausoleums and tombs, some of which were crafted by the greatest sculptors in Chile, and is surrounded by gardens, lanes, leafy trees and beautiful sculptures. The monument to a suffering sculptor, by Carrier Belleuse, is found at the entrance to the cemetery, with more elaborate tombs lying further afield. Victims of the 1863 Iglesia de la Compania are buried here.

A memorial to the late president Salvador Allende makes this cemetery one of the top visited sites in the country. Reportedly, Allende committed suicide during the coup of 1973, staged by General Augusto Pinochet, which led to his ousting from power and the establishment of Junta regime. After Chile returned to democracy in the 1990s, the remains of Salvador Allende were exhumed from the Santa Ines cemetery and placed at the Cementerio General de Santiago. Also, there is a memorial to those who disappeared during Pinochet's rule.

The land on which the cemetery is laid out was set aside by Bernardo O'Higgins in 1819, after the country proclaimed independence. To date, there are over two million burials on the ground, making it the one of the largest burial sites in Latin America.
Image by Alstradiaan on Wikimedia under Creative Commons License.
Sight description based on wikipedia

Vaticura is the most fashionable and the richest commune in Santiago. Citizens with a very high income are known to live in this area. The best shops, wineries, and many commercial art galleries are located here. This tour will take you to the most popular places of Vitacura Commune: