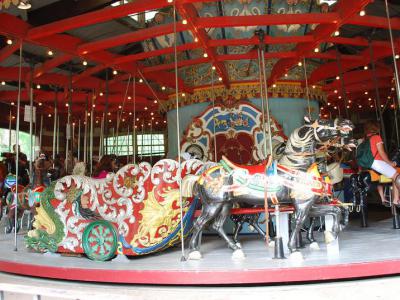 While in Central Park you can wander over to one of the largest and most popular carousels in the country. The one you see today is the fourth to occupy this spot. Two earlier ones were destroyed by fires. The current is a gift "to the children of New York" from the Michael Friedsam Foundation. It was built in 1951, though it looks much older – which is very likely what the architect intended, as it was replacing models from early in the 20th century.

There is no gravity-defying surge, no virtual reality, no computerized light show, no 3D projection – just simple mechanical horses that go round and round, and up and down while lovely-cheesy old-timey music plays on, which is the same ride people have been having for decades and decades! While there's a fee for rides, watching and listening to the music is free.

There are rarely queues that build up more than one ride long, so waiting times are quite short.