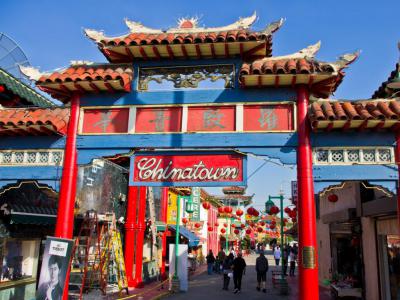 Marking one of the four entrances to New Chinatown, the West Gate on Gin Ling Way at North Hill Street was the first gate built around the Central Plaza. In 1938, L.A.’s Chinese community gathered at this site to celebrate the opening of New Chinatown after the original Chinatown, about a mile away, was uprooted to make room for Union Station. Gin Ling Way, one of Chinatown’s main pedestrian strips, is named after the “Street of Golden Treasures” in Beijing.

The four Chinese characters displayed across the top of the gate, composed by T.K. Chang, translate as “Cooperate to Achieve.” The red, blue, and yellow neon lights adorning the gate’s perimeter were added later. Color-coordinated with all the red lanterns at night, they create a most spectacular sight.

Initially, the gate was partially made of 150-year-old camphor wood imported from China. This durable lumber has been described as the “smelly cousin of cinnamon”—its odor repels insects. The original pillars later had to be replaced with concrete, though, because of weathering and dry rot. The red color of the gate symbolizes happiness and good fortune in Chinese tradition.

Among the memorial plaques displayed at the gate there is one dedicated to 19th-century Chinese builders, presented by then-California governor Frank F. Merriam, and two others commending architects Adrian Wilson and Erle Webster. The city of Los Angeles declared the West Gate a Historic-Cultural Monument in 2005.
Image by Antoine Taveneaux on Wikimedia under Creative Commons License.