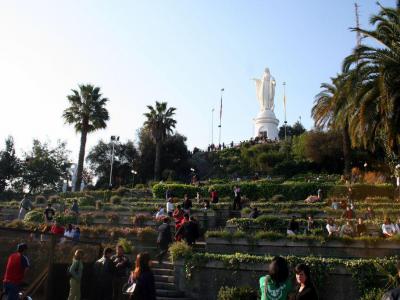 Those who seek the best view of picturesque Santiago de Chile should make their way to the majestic San Cristóbal Hill in the northern part of the city. The hill rises to about 880 meters, which is approximately 300 meters higher than most of the sites in Santiago. It is the second highest spot in the city, and the view it affords is quite spectacular.

At the very top of the hill stands the statue of Virgin Mary, inaugurated in 1908. There is also a church which became well known after Pope John Paul II served a mass there in 1987. The largest park in Santiago, a vast urban expanse of green space with varied landscapes and roads for vehicles, is also found on the hill.

If you go there on a sunny summer day shortly after it is rained and the smog cleared off, you can see virtually everything from the high-rising towers of Santiago to the Andes mountains far beyond.

Why You Should Visit:
The "must-see" big hill in Santiago, hands down. Many things to do in the park, like hiking its many trails, cycling, going to the pool in the summer, riding the funicular and the recently renovated cable car, visiting different corners (Japanese Garden and/or different playgrounds), etc.

Tip:
Make sure you get Mote con Huesillo at the peak! Most refreshing (made with a dried peach, husked wheat and sugar syrup) traditional drink plus an 'empanada de pino'!
Image Courtesy of Flickr and Felipe Skroski.