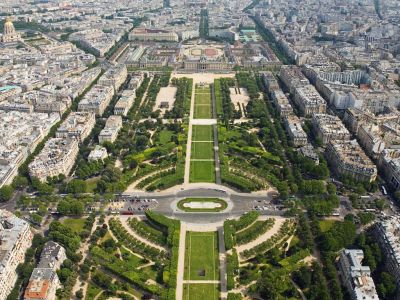 In sunny weather, there is nothing better in Paris than stretching out somewhere on a grassy lawn. The “Field of Mars”, one of the largest parks in Paris, generously offers such an opportunity to those lucky with plenty of time under their belt. This popular outdoor space takes its name from the ancient Campus Martius in Rome, once the drilling ground for the Roman armies preparing for war. Back in the day, the French used this field pretty much for the same purpose as well, although prior to that, in the 16th century, this was just a vegetable plantation.

Most of the time, though, the park is just a charming green oasis amid the sprawling metropolis, offering, among other delights, some of the greatest views of the nearby Eiffel Tower, especially at night when its illumination goes on every hour.

A favorite spot for many, just as any other major public park, Champ de Mars may get rather busy on sunny days. This, however, doesn't seriously reduce chances of finding some quiet nook further afield. Those coming with kids will find comfort here, too, in the form of at least two playgrounds available at their disposal.

Why You Should Visit:
Best place to get photos of the Eiffel Tower and to see it sparkle every hour in the evenings.

Tip:
Consider bringing a mat/cover for lying about.
Image Courtesy of Wikimedia and Diliff.