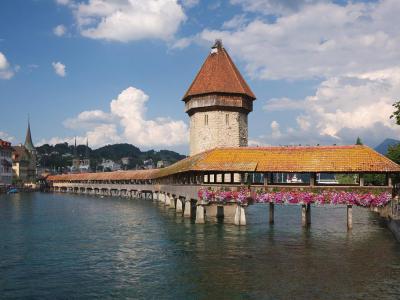 The Chapel Bridge is a covered wooden foot bridge spanning diagonally across the Reuss River in the city of Lucerne. Named after the nearby St. Peter's Chapel, the bridge is unique since it contains a number of interior paintings dating back to the 17th century, although many of them were destroyed along with most of the centuries-old bridge in a 1993 fire. Subsequently restored, the Chapel Bridge is the oldest wooden covered bridge in Europe, as well as the world's oldest surviving truss bridge. It serves as the city's symbol and as one of Switzerland's best known tourist attractions.

The bridge itself was originally built in 1333 as part of Lucerne's fortifications. It linked the old town on the right bank of the Reuss to the new town on the left bank, securing the city from attack from the south of the Lake Lucerne. The bridge initially had a length of over 200 meters (660 ft), but due to numerous shortenings throughout the years and river bank replenishments, the bridge today totals 170 meters (560 ft) in length.

Lucerne is unique in that its three wooden pedestrian bridges, the 14th-century Hof Bridge (now destroyed) and Chapel Bridge and the 16th-century Spreuer Bridge, all featured painted interior triangular frames. None of Europe's other wooden footbridges have this feature. The paintings on the Chapel Bridge date back to the 17th century and were executed by local Catholic painter Hans Heinrich Wagmann, and they depict events from Lucerne's history. Of the original 147 paintings existed before the 1993 fire, 30 were fully restored.

Tip:
Experience it at night with the city lights, swans, flowers and romantic atmosphere. Both banks are full of great shopping and fantastic restaurants.
Image Courtesy of Wikimedia and Ikiwaner.
Sight description based on Wikipedia.