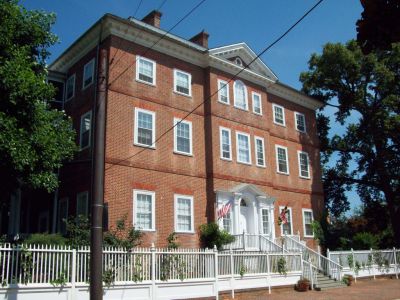 The Chase-Lloyd House in Annapolis is a three-story brick Georgian mansion, dating from 1769-1774, with interiors by William Buckland.

Its construction was started for Samuel Chase, who would later be a signatory to the Declaration of Independence and Associate Justice of the Supreme Court, but Chase sold the building unfinished to Edward Lloyd IV in 1771. Lloyd completed the house in 1774 with assistance from Buckland and another architect, William Noke. The house remained in the Lloyd family until 1847, when it was sold back to the descendants of Chase.

The house's plan is of the four room, center hall type, but on a very large scale. The entrance hall contains a screen of free-standing Ionic order columns, beyond which a central stair rises to the large Palladian window at the landing. The ascending stair flights split at the landing, rising in parallel runs to flank the first run on either side. In 1888 the house was bequeathed for use as a home for elderly women, and it continues in this use today. While the upper floors are off limits to visitors, the main floor and the extensive gardens are open to the public. The house was designated a National Historic Landmark in 1970.
Image by Pubdog on Wikimedia under Creative Commons License.
Sight description based on wikipedia