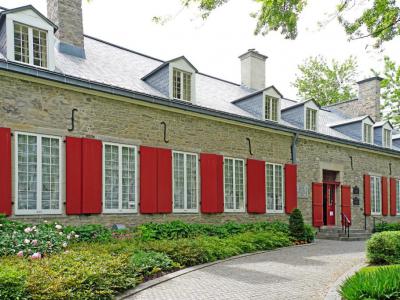 Built in 1705, this "chateau" first served as a residence of the governor of Montreal, Claude de Ramezay, who paid for construction out of his own pocket. The building has gone through many incarnations in its three-century history, including head offices for the French West India Company (1745-64), the base for American Revolutionaries including Benjamin Franklin (1775-76), and Université de Montréal's first Faculty of Medicine (1884-89). The first building proclaimed as a historical monument in Quebec, it currently houses an extensive collection of 30,000 objects including manuscripts, printed works, numismatic and ethnological items, works of art, paintings, prints and furniture. Those passionate about history should make a stop at this informative and interesting museum when passing through Old Montreal.

Though multimedia displays take you through the building's evolution, the real focus is on the history and progression of the city, from the time of its discovery until Confederation. One of the highlights includes the Salle de Nantes, a mahogany-paneled room from 1725 whose decoration was rightly or wrongly attributed to Germain Boffrand, chief architect to Louis XIV and Louis XV. The room was part of the French pavilion at the 1967 Expo and was donated to the museum shortly after. Of the entire house, the basement feels the most preserved, with vaulted ceilings and authentic fireplaces; it's also where the life of Montréal's 18th-century inhabitants is depicted, with re-creations of one-room homes, mannequins in traditional dress, examples of farming material, and a room dedicated to the furniture found in homes during the period. All in all, you will probably spent about an hour here, which is fine for a self-guided tour.

Why You Should Visit:
Plenty of easily-digested visual and written info about the history of Montreal packed into a historic building, plus a wonderful garden out back replete with 18th-century touches, and helpful staff.

Tip:
There are kid-oriented exhibits at the end (basement level) if they can manage to hang on.