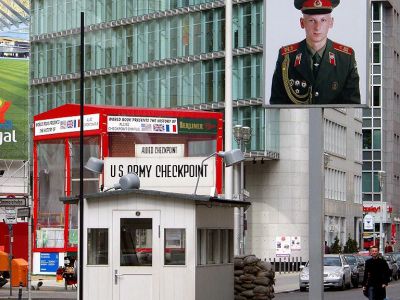 Immortalized by American movies and spy novels, Checkpoint Charlie is one of the most famous and historically significant spots in Berlin. A symbol of the Cold War, originally it was one of the three designated crossing points – A (Alpha), B (Bravo), and C (Charlie) – for foreigners and members of the Allied forces, established after the construction of the Berlin Wall. Here the documents of visitors and diplomats were checked by East Germans prior to issuing visas.

Checkpoint Charlie became a sole crossing point in 1962. A year earlier, it made history as the venue of a famous stand-off between US and Soviet tanks facing each other across the border, when an American diplomat was refused a visa. The stand-off nearly led to a war but fortunately ended peacefully.

Today, a replica of the original Checkpoint Charlie booth with a “You are now leaving the American Sector” sign serves largely as a photo opportunity in the middle of the street that once marked the border between East and West Berlin. Nearby is a museum dedicated to freedom, featuring, among other exhibits, a piece of the Berlin Wall and historical information relating to the many escape attempts made over the Wall throughout decades. There are also a number of panels and photos that give a useful summary and timeline. Not far away is the Topography of Terror exhibition which also deserves attention.

Lately, to prevent the site from being over-commercialized, the German authorities have banned actors dressed in military uniforms to earn money from tourists. Undoubtedly an interesting location, albeit the guard house and other elements are only replicas, Checkpoint Charlie is about an appreciation of how things once were in this great city.

Why You Should Visit:
Bit of a tourist trap, but a good part of the city's history. The surrounding area is also steeped in history and you can walk around the streets to see the Berlin Wall and try the great local cafes.

Tip:
Get here early to avoid crowds, as taking a photo can be quite tricky due to the hustle and bustle of traffic, etc.
Image by Raimond Spekking on Wikimedia under Creative Commons License.
Sight description based on wikipedia