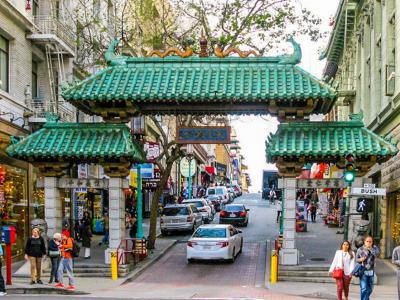 Facing south, as per the principles of Feng Shui, this large dragon-clad arch is a popular (yet somewhat dramatic) entry to San Francisco Chinatown. Opened in 1970, the gate was made from the materials gifted by Taiwan, but the actual design came from Chinese-American architect Clayton Lee inspired by ceremonial entrances to Chinese villages. In keeping with tradition, whereby such gateways are often commissioned by the wealthy who wish to enhance their status by having their names inscribed on the gates, the Chinatown portal carries four-character inscription which translates to "All under heaven is for the good of the people".

Among other notable features it has two large guardian lions (or lion dogs) looking over the pedestrian entrances. The one on the west side is male and that on the east is female. You can always tell which is which since the lioness holds a cub under her paw, while the male holds a ball. Both the gate and the lions symbolize protection from evil spirits.

Beyond the gate, the pagoda-topped architecture was innovated by Chinatown merchants in the 1920s – a pioneering initiative to lure tourists with a special modern look. Indeed, this had worked, as the dragon streetlights soon chased away the red-light-heyday shady ladies. Today, they light the way to the elegant shops where you can buy antiques, silks, teas, gems, and more.
Image Courtesy of Flickr and Brian Godfrey.

A commercial and cultural hub of northern California, San Francisco is a popular tourist destination, known for its steep rolling hills and eclectic mix of world-famous landmarks. The iconic Golden Gate Bridge, the teeth-rattling cable cars carrying riders up and down the Nob Hill, the Alcatraz Island, and the oldest Chinatown in North America are just some of the city's prominent...  view more