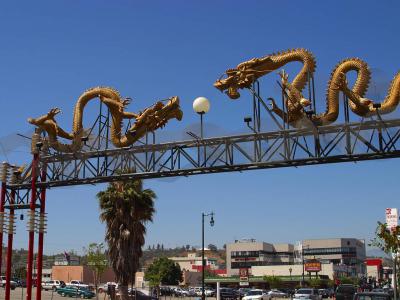 Los Angeles' historic Chinatown has long served as a gateway for countless Chinese and Asian immigrants coming to the United States. Commemorating this historic fact is the Chinatown Gateway Monument, also known as the Dragon Gate, found at the intersection of North Broadway and Cesar E. Chavez Avenue. Funded by the local Teochew-speaking population, the monument symbolizes mutual cooperation and prosperity for the local Chinese community and the city of Los Angeles, and features two dragons poised on a metal framework, ushering in good luck and harmony.

Designed by Chinese-born architect Ruppert Mok, the Gateway was dedicated in June 2001. Mok’s design was said to have come to him in a dream in which he ran across North Broadway and saw a skeleton across the street with two dragons flying on top of it, facing one another, with a pearl right in the middle; the envisioned dragons descended from a cloud.

Painted in the traditional bright gold with red flames at the elbows, the gatekeeper dragons soar 43 feet above ground, set on an 80-foot-wide steel truss welded to eight steel pipes. Aluminum mesh on both sides create the cloud-like effect along with a misting system with nozzles tucked underneath the dragons. The fine spray of water creates the illusion of majestic beasts “flying in the clouds.”

The 3,000-pound fiberglass figures have fins on their backs, scales on the sides of their bodies, and snakeskin on their bellies; the five fingers on each paw represent the highest authority. Their whiskers are 10 to 15 feet long. Each curved dragon measures 35 to 40 feet in length (or up to 70 feet, if straightened out).

The dragons face each other, one looking down with its mouth wide open, and the other looking up with its mouth only slightly ajar. An opaque-fiberglass pearl – representing longevity and prosperity – appears to float between them, held up by a steel bracket. Mok made the taller of the dragons look more aggressive, while the other is more defensive, subtle and protective. Whether they are female or male, is subject to everyone's guess.

If you walk through the Gate, make sure to turn around and look south for a perfectly-framed shot of the City Hall. Brightly illuminated at night since 2004, it offers an ideal photo spot any time of the day.
Image by J3ff on Wikimedia under Creative Commons License.