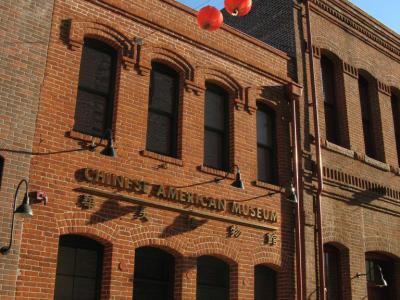 The Chinese American Museum is a part of the El Pueblo de Los Angeles Historic Monument, and is dedicated to the history and experience of Chinese Americans in the state of California. This is the first such museum in Southern California, and is located in the oldest and last surviving structure of Los Angeles’ original Chinatown – Garnier Building – that luckily survived after a large part of Old Chinatown was demolished to make way for the construction of Union Station in 1933.

The facility was built in 1890 by Philippe Garnier, a French immigrant and prominent businessman, who designed it primarily for Chinese commercial tenants. In its heyday, between 1890 and 1940, the building served as the unofficial city hall of the Chinese community, housing social organizations, shops, businesses, schools and religious institutions, as well as being the venue for social functions, theatrical and dance shows. It thus bridged the gap between Chinese and American society – playing a critical role in the backdrop of the strong American prejudices against the Chinese in Southern California, especially following the Chinese Massacre of 1871 and the Chinese Exclusion Acts of 1882-1943. The building was continuously occupied by the Chinese commercial tenants (taking up the ground and mezzanine floors) and Chinatown’s leading social institutions (on the upper level) until the State of California took it over in 1953.

The museum on the premises opened in 2003. Chinese American families and businesses donated their heirloom possessions to it – traditional attire, antique furniture, faded photographs, old letters, audiotapes from elderly Chinese Americans on their memories of growing up in Old Chinatown, children’s toys, etc.

Presently, the museum holds a number of permanent exhibitions on the origins and history of Chinese immigration to L.A., namely: “Origins: The Birth & Rise of Chinese American Communities in Los Angeles”, “Journeys: the story of Chinese immigration to the US with an emphasis on the community settling in Los Angeles”, and “Sun Wing Wo General Store and Herb Shop” recreating the actual store operated inside Garner Building from 1891 to 1948. There are also temporary exhibits showcasing modern talents. Additionally, the museum hosts workshops, events and brings out publications to foster better mutual understanding and cultural appreciation between the Chinese and the Americans.

Opening Hours:
Tuesday – Sunday, 10am to 3pm. Closed on Mondays.
Image by Geographer on Wikimedia under Creative Commons License.
Sight description based on wikipedia