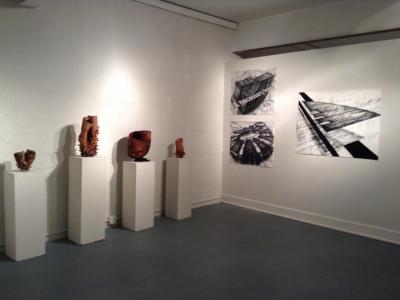 Just across the street (Hill Street) from the neon glow of Central Plaza lies a tiny alleyway, called Chung King Road. Along with Chung King Court, containing a water fountain in its center, it forms a pedestrian complex in the northwest corner of New Chinatown built in the 1930s and 40s. Only 40 feet wide and bare and quiet during the day – with only occasional someone passing through as a shortcut to Chinatown's main attractions, this street once used to accommodate numerous restaurants, herbal medicine pharmacies, Chinese specialty shops, importers of Chinese art and other traditional businesses, whose owners lived right upstairs, creating a strong sense of community.

By the late 1990s the majority of the long-time residents had moved away to other parts of the city. The left behind storefronts of businesses of the past remained unused for a while, until several of them were turned into art studios and boutiques and other unique businesses. Today, the neglected Hollywood backlot-esque appearance of Chung King Road belies the cultural hipness in the form of new generation of L.A.'s cutting edge art galleries set up behind the worn facades, transforming the area into a frenzy of activity during Saturday night openings with throngs of art enthusiasts flocking in to check out the latest exhibits on view. Many of cutting-edge artists reside right here, in the area, making it a thriving live/work community. The area's tenants constantly change, though, as the artists tend to come and go.

With its nearly weekly schedule of art gallery exhibition openings, Chung King Road is now one of the centers of art and nightlife in Downtown L.A. The annual events include Chinese New Year and the Golden Dragon Parade, The Moon Festival, KCRW's Chinatown Summer Nights, the closing party of LA's Design Week and the Perform! Now! Festival. Many of the storefronts have maintained their original signs and facades, so it's still worth walking through to get a sense of the area's former vibe.
Image by kajikawa on Wikimedia under Creative Commons License.
Sight description based on wikipedia