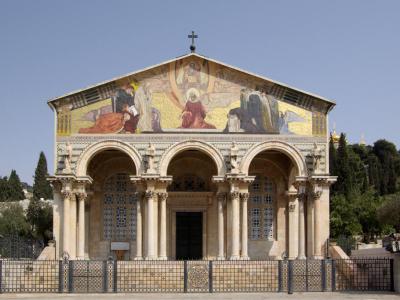 Church of All Nations, Jerusalem (must see)

The Church of All Nations, also known as the Church or Basilica of the Agony, is a Roman Catholic church located on the Mount of Olives in Jerusalem, next to the Garden of Gethsemane. It enshrines a section of bedrock where Jesus is said to have prayed before his arrest.

The current church rests on the foundations of two earlier ones, that of a 4th-century Byzantine basilica, destroyed by an earthquake in 746, and of a small 12th-century Crusader chapel abandoned in 1345. In 1920, during work on the foundations, a column was found two meters beneath the floor of the medieval crusader chapel. Fragments of a magnificent mosaic were also found. Following this discovery, the architect immediately removed the new foundations and began excavations of the earlier church. After the remains of the Byzantine-era church were fully excavated, plans for the new church were altered and work continued on the current basilica from April 19, 1922 until June 1924 when it was consecrated.

An open altar located in the gardens of the church is used by many Christian denominations including followers who are Roman Catholic, Eastern Orthodox, Armenian Apostolic, Protestant, Lutheran, Evangelical, Anglican, and any other version of Christianity that is culturally unique to any particular nation.
Image by David Shankbone on Wikimedia under Creative Commons License.
Sight description based on wikipedia