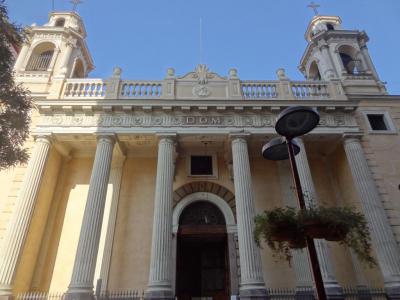 Church of Our Lady of Grace, Santiago

This catholic temple in downtown Santiago belongs to the religious order of Saint Augustine. It is the second oldest church in Chile, built in 1625, and was later remodeled into Neoclassical and Baroque styles.

The wooden figure of Christ, located inside the church, is an attraction in its own right and draws thousands of pilgrims each year from all over the world because of a legend associated with it. According to this legend, during an earthquake that hit Santiago de Chile in 1647, the figure of Christ, that had traditionally a crown of thorns on its head, got shaken and the crown slipped down to the neck. An individual, who was there at the time, attempted to return the crown to its original place, on the head, at which point the face of Christ started bleeding and the whole ground began to shake. They took it as a sign and since then the crown has never been touched again; it remains on the neck of the statue to this very day. Other than that, the church is noted for its architectural splendor and is open to all members of the public, religious and non-religious.
Image Courtesy of Flickr and Jonas de Carvalho.