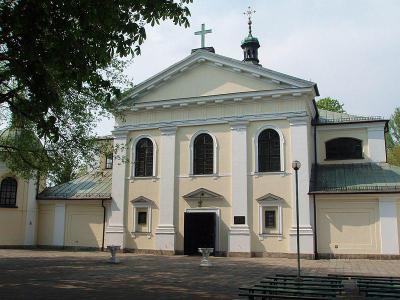 Situated in Praga, a district of Warsaw, this aesthetic church features ornate decorations. Church of Our Lady of Loreto is one of the oldest in Praga and stands on the City Hall or Ratuszowa Street. Formerly, it was a chapel that was attached to a Bernardine monastery and a baroque church.

King Sigismund III Vasa laid the cornerstone for this baroque church. It was between 1628 and 1638 that construction of St. Andrew’s Church took place. Between 1640 and 1642, Loreto Chapel was constructed in the shrine’s southern part.

It was designed by Constantino Tencalla, the royal architect. The church resembles an Andrea Sansovino and Donato Bramante designed Basilica della Santa Casa. Inside the church, you will find a copy of the Loreto House. Legend says that this house was transported to Croatia from the Holy Land by angels. In 1294, it was again transported to Loreto, an Italian town.

Brandenburgian and Swedish forces destroyed this church during the Deluge. It was rebuilt with the help of donations and was again damaged during the Kosciuszko Uprising. In 1807, Napoleon’s Army pulled down the Skaryszew Church. One of the precious items, a Madonna and Child of Kamion Gothic cedar statue, was transported to the Church of Our Lady of Loreto.

German artillery fire destroyed this church again during the Warsaw Uprising. It was rebuilt to its present form in 1953 by Alfons Kropiwnicki.
Image by Mister No on Wikimedia under Creative Commons License.
Sight description based on wikipedia