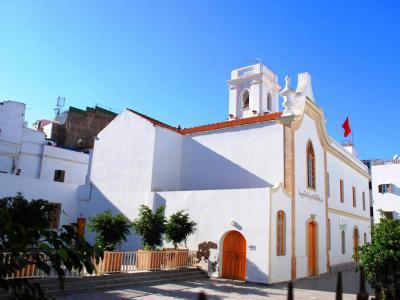 Saint Bonaventure was born Giovanni di Fidanza in Bagnoregio, Italy in 1217. When desperately ill as a boy, he was healed by Francis of Assisi, who declared him to have "Buona Fortuna (Good Luck)." The name stuck. He forever became Bonaventure. In Tangier Street in the Medina of Casablanca in 1890, Spanish Franciscans founded the Church of San Buenaventura.

The church was built on land granted to King Alfonso XII of Spain by Sultan Hassan I of Morocco. San Buenaventura thus became the seat of the Spanish church in Casablanca. In 2010 King Mohammed VI announced a vast project of urban renewal for Casablanca, focusing especially of the rehabilitation of the old city.

Among the monumental buildings to be renovated was the Church of San Buenaventura. The church had ceased to operate as such in in 1968. The Spanish Embassy ceded the property to the City of Casablanca and the church began hosting needy families. By 2016 the church had been changed into a cultural center.

Today the church operates as a youth house, a community sports center, an artisanal ensemble and cultural resource center of the old city.
Image Courtesy of Wikimedia and Rais67.