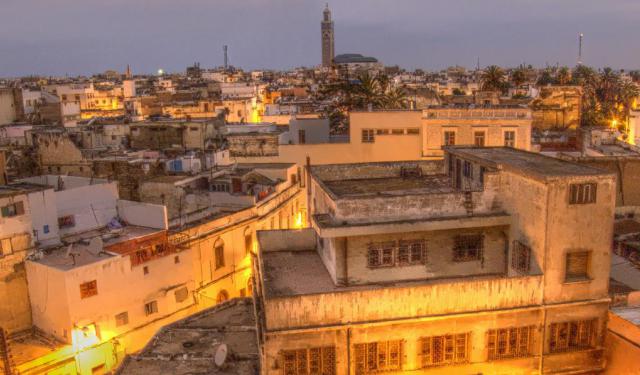 Surrounding the Old Town is a fairly well-preserved wall, stretching for about 4 km, with eight gates. The best known of them is the southern one, called Bab Marrakech or Medina Gate, with the nearby Clock Tower standing in the middle of United Nations Square (Place des Nation Unies), formerly France Square (Place de France). The Tower was originally built in 1911, but was demolished in 1948 for being "shaky". In 1993, it was rebuilt not far from its original location.

Remnants of the old city life, found along the narrow alleyways that have stayed the same for hundreds of years, are still quite visible. Among them is the oldest mausoleum in Casablanca housing the tomb of the city's first patron saint, Sidi Allal el-Kairouani, protector of sailors and fishermen.

The city started to grow out of the old town area essentially in the 1920s. Much of the historic center is now a bazaar with artisans selling leather goods, oils, linens, shoes and spices, or even antiques passed down by their ancestors.

Here you will also find various outdoor cafés and smaller restaurants. One such, overlooking the harbor near the place once called "Casa Branca" by the Portuguese who built a fort (sqala) here in 1515, is the La Sqala café. Another prominent landmark of the old town, that the true lovers of movies wouldn't want to pass, is Rick's Café Casablanca, recreating the legendary “gin joint” featured in the 1942 classic “Casablanca”.

If you wish to step back in time strolling through the whitewashed crooked lanes, tree-shaded squares and feel the pulse and spirit of historic Casablanca, take this self-guided walk of the Old Town of Casablanca.
Image Courtesy of Flickr and Dragunsk Usf.
How it works: Download the app "GPSmyCity: Walks in 1K+ Cities" from iTunes App Store or Google Play to your mobile phone or tablet. The app turns your mobile device into a personal tour guide and its built-in GPS navigation functions guide you from one tour stop to next. The app works offline, so no data plan is needed when traveling abroad.

Charles Martial Joseph Dessigny, it has been said, had a sort of obsession. He really liked towers. He was a military man, Army of France. He'd had served in Ain Sefra, in Algeria, where he had built a fine clock tower. When he was done with the artillery bombardment in Casablanca, he would build another tower, just like the one before.

He occupied Casablanca, took charge of the French department of public facilities and ordered the construction of the tower. He acted so fast the tower was completed before 1912, when the French Protectorate of Morocco became official. It was brilliant. A tower to rival the minarets, it signified the dawn of French power in Morocco.

The tower looked very like a minaret. It was square-based, like a minaret. It had four round clock faces with roman numerals. Over the years the tower became unstable. It was demolished in 1948. But not to worry. A duplicate tower was built nearby in 1993.

Walking through the old city between central Casablanca and the mosque of Hassan II, in the northeast corner of United Nations Square, discover the copy of Dessigny's beloved tower. Next to the tower is the Old Medina Gate. Most shops or stalls to be found will be close to the gate. The Medina has undergone much renovation and is now mainly residential.

The mosque was built at the order of Sultan Sidi Mohammed Ben Abdallah in the 1700s. The Sultan supervised the construction closely. He was present at the laying of the foundation and at the first Friday prayers. The building received an extension in the 19th century by Sultan Moulay Hassan I. King Mohammed V added further in 1950.

The rue Dar el-Makhzen connects to the Rue Sidi Bousmara which leads to the shrine of Sidi Bousmara, a saint who settled in Casablanca.
Image Courtesy of Wikimedia and Rais67.
3

In the center of the old city of Casablanca there is a mosque that once went by the name "Fig Tree Mosque." It was a very small mosque. It was built in 1899 by Mohammed Senhadji of Sousa. In time the fig tree and the mosque grew. The growing congregation needed more room. The name of the Mosque changed to Jamaa as-Chleuh.

The Jamaa as-Chleuh mosque can be found on the Rue des Chleuh, literally in the "heart" of the old city of Casablanca. It is near Bab Marrakech, an arched sandstone gateway that withstood the earthquake of 1775. The Chleuh mosque has its own particular beauty. It is a true Friday mosque.
Image Courtesy of Flickr and Ninara.
4

Saint Bonaventure was born Giovanni di Fidanza in Bagnoregio, Italy in 1217. When desperately ill as a boy, he was healed by Francis of Assisi, who declared him to have "Buona Fortuna (Good Luck)." The name stuck. He forever became Bonaventure. In Tangier Street in the Medina of Casablanca in 1890, Spanish Franciscans founded the Church of San Buenaventura.

The church was built on land granted to King Alfonso XII of Spain by Sultan Hassan I of Morocco. San Buenaventura thus became the seat of the Spanish church in Casablanca. In 2010 King Mohammed VI announced a vast project of urban renewal for Casablanca, focusing especially of the rehabilitation of the old city.

Among the monumental buildings to be renovated was the Church of San Buenaventura. The church had ceased to operate as such in in 1968. The Spanish Embassy ceded the property to the City of Casablanca and the church began hosting needy families. By 2016 the church had been changed into a cultural center.

Today the church operates as a youth house, a community sports center, an artisanal ensemble and cultural resource center of the old city.
Image Courtesy of Wikimedia and Rais67.
5

The Ettegui Synagogue was built in 1920 by the Ettegui family. The Etteguis were a prominent bourgeois family of Casablanca. Things went well enough until World War II. During the invasion of North Africa, the Allies bombed Casablanca and wouldn't you know it? They hit the synagogue.

Jewish numbers and resources in Morocco had dwindled significantly in the post-war period and the reactionary reign of King Hassan II did little to help interdenominational understanding. In 1999 King Hassan II assumed the throne. He proved to be a social reformer. He established a new constitution and instituted a Jewish Heritage program.

In 1515 the Portuguese established fortifications next to the place they called "Casa Branca." Technically, the fortification could be called a bastion, a scala or sqala. The sqala, renovated in the 18th century, exists in the old city today but it is now a fortified restaurant, established to fortify against that empty feeling.

La Sqala is nestled in the yellow-orange walls of the bastion at the edge of the old city. It is a peaceful garden restaurant, especially famous for breakfast. What's on the menu in the morning? How about briouates (stuffed pastries), tajines, bastilles (spicy sweet pies) and brochettes (kebabs). Sorry, no alcohol, but there's lots of juice.

The restaurant is attractively designed. The feeling is of a quiet garden haven, away from the busy city. Whatever the hour, try the pastille cream dessert and Moroccan tea. The important things about a restaurant are food, yes, service, yes, and location, location, location.
Image Courtesy of Flickr and Abderrahman Amazzal.
7

In the 14th century a Muslim saint, Sidi All el-Kairouani, embarked on a voyage from the town of Kairouan in Tunisia. He was going to Senegal. Why he was going to Senegal is not known, for his ship foundered off the coast of Morocco and he was thrown into the sea. As fate would have it, he was rescued by fishermen who became his disciples.

In time, it is believed, he sent for his daughter, her name was Lalla Baida. She too embarked from Kairouan and her ship also foundered but she did not survive. He asked his followers to bury her by the shore. He told them that when he died, he wished to be buried beside her. Their tomb and shrine is behind the sqala in old city.

The shrine was restored properly by Sultan Sidi Mohamed Ben Abdallah in the 18th century. To this day fishermen pray to him as their patron saint. Some say Casablanca got its name from the white walls of the tomb seen from the sea. But who knows if this is true?
Image Courtesy of Wikimedia and Rais67.
8

Go to number 248 Boulevard Sour Jdid, Place du Jardins Public in Casablanca, act natural, knock twice and ask for Rick. That would be a fun way to wind up a busy day in the Old City. There is no Rick, but this is his place; a restaurant cafe that opened in Casablanca in 2004. It is modeled on the shady dive made famous by Humphrey Bogart.

The owners are The Usual Suspects company. They maintain this cafe is the real McCoy. Rick's Cafe was conceived by Ms Kathy Kriger. Kathy retired from the diplomatic service after the 9/11 attacks. Alarmed at the "war on terrorism", she made her bid for tolerance by investing in a Muslim country. The result was Rick's Place. Kathy died in 2018.

The cafe is in a renovated Moroccan mansion with a courtyard built in 1930. Two palm trees stand on either side of the front door. There are three facades. There is a main entrance with sturdy wooden doors as in the movie. There are also a facade facing the sea and a dead-end service entrance.

American architect Bill Willis brought back the architectural details of the film. He developed the curved arches, the sculpted bar, the balconies, balustrades, the lighting, the plants and the shadowy white walls. The fireplaces are made from carved marble and painted tiles. The floors are terra cotta tiles.

There is a Pleyel piano and music every night Tuesday through Sunday. There are often jam sessions with musicians passing through town. Play it again, Sam.
Image Courtesy of Wikimedia and Werner100359.