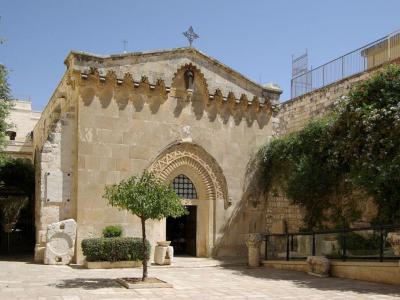 Church of the Condemnation / Flagellation, Jerusalem

Belonging to a Franciscan monastery, these two churches in one site mark the second station of Via Dolorosa (after the Church of St Anne), traditionally held to be where Jesus took up his cross after being sentenced to death by crucifixion.

On entering the grounds just off the main street, you arrive in a picturesque courtyard with beautiful plants. On the left lies the Church of the Condemnation topped by five white domes, each of them sitting on drum containing stained-glass windows depicting themes from Christ's Passion. Further illustrations can be seen on the walls: Pontius Pilate washing his hands, and soldiers imposing the cross on Jesus. Another interesting feature is the Roman-period floor next to the building's western wall, made of very large, striated stones that kept animals' hooves from slipping.

On the right you will find the Church of the Flagellation. It is simple but offers stained glass windows and an attractive mosaic on the domelike ceiling; although not obvious at first glance, the latter is designed as a circular pattern of thorns. The northern window depicts Pontius Pilate washing his hands, the central one behind the altar depicts the Flagellation, and the southern one the victory of Barabbas.
Image Courtesy of Wikimedia and Berthold Werner.