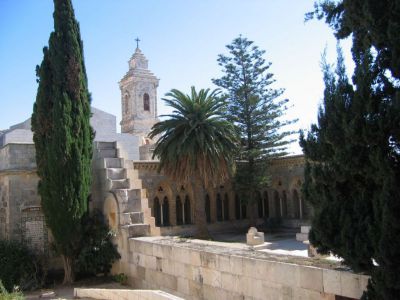 Church of the Pater Noster, Jerusalem

South of the Chapel of the Ascension, past a grove of ancient olive trees, this church is set in an enclosed garden and built over the grotto (cave) in which Jesus preached on the ultimate conflict of good and evil leading to the end of the world. The Crusaders, believing it to also be the place where Jesus taught his disciples the Lord's Prayer, gave the church its present name – Pater Noster being Latin for "Our Father".

The original Basilica of Olives, built under the direction of St Helena in AD 326, was destroyed by the Persians 300 years later, its partly restored ruins interesting to see. The building that stands here today dates from the late 19th century when the site was supervised by contemplative Carmelite nuns.

Inside, a short flight of stairs from the south side of the open courtyard leads to the tomb of the Princesse de la Tour d'Auvergne who bought the property in 1868 and had the Lord's Prayer inscribed in 62 languages on exquisitely tiled panels in the entrance and cloister (their number has more than doubled since then, also including various dialects).

Tip:
If unsuccessful in finding your own language, ask for help in the shop – they have a map of all panels/plaques.