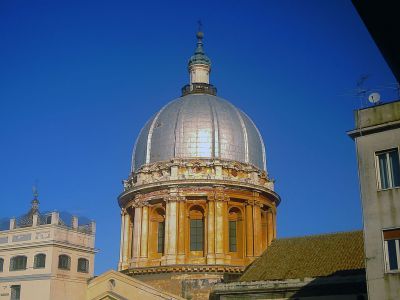 Church of the Spirito Santo, Naples

The basilica of the Holy Spirit is a small church from 1562. Previously on this spot stood the Duke of Monteleone palace, flanked on both sides by two music conservatories: one of the so-called White brotherhood (Real Compagnia and Arciconfraternita dei Bianchi dello Spirito Santo) and the other of the Green sisterhood. Their names were due to the colors of the clothing worn by the students: the former being the poor of the city, and the latter – the daughters of prostitutes.

The expansion works of 1572-1576 saw the White Convent complex, of which only the homonymous oratory remains today, incorporated into the body of the church, drastically increased.

Complete with its famous dome, the church stands over 70 meters high. The dome was built in 1775 during renovation of the central basin, in order to provide illumination for the nave. Both, the nave and the dome's inside are devoid of any pictorial or otherwise decorative element, whereas the rest of the interior is lavishly decorated with sculptures by Michelangelo Naccherino and Paolo Persico.