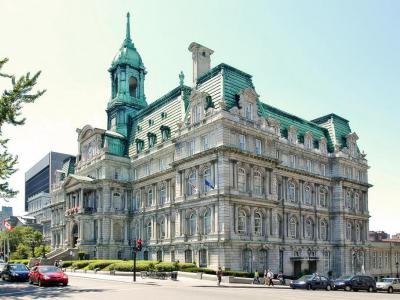 As is the case with some cities, city halls tend to be icons and featured on postcards and in tour books. Such is definitely the case with Montréal's Hôtel de Ville of the late 19th century, which overlooks the port and takes its place alongside other important administrative buildings. One of the best examples of the Second Empire style in Canada, its front and its sides are beautifully decorated with attractive turrets, balconies, and mansard roofs, and that's what you see if walking along Rue Notre-Dame or if walking up Place Jacques-Cartier.

Inside, the Hall of Honour is an open space full of marble/gold embellishments that houses Art Deco lamps from Paris and a bronze-and-glass chandelier, also from France, weighing a metric ton. In the council room, the five stained-glass windows, installed in the 1920s, depict the fundamental aspects of the city: religion, agriculture, the port, commerce, and finance.

Behind Hôtel de Ville is a pocket of green known as the Champ-de-Mars, which served as a military parade ground and city parking lot before it was converted into a park in the 1980s. During the conversion, workers unearthed remains from the city's old fortifications, and parts of the restored city walls were incorporated into the site.

Tip:
As opposed to many gov't buildings with restricted public entry, the Montréal City Hall permits visitors to take a quick free tour. There are a handful of these to choose from, with the separate FR/EN schedules clearly visible when walking in.