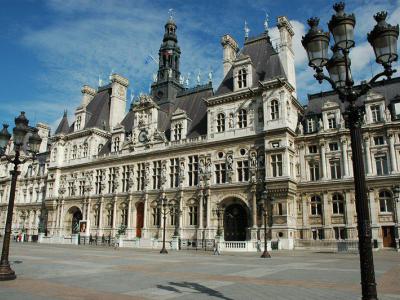 Paris City Hall is the largest city hall building in Europe and one of the most prominent landmarks of the French capital. Curiously enough, the early sessions of Paris municipal council were held at the home of a city mayor – the practice continued until the 16th century when King Francis I ordered to build a dedicated Renaissance-style city hall.

Centuries later, that first purpose-built edifice served as headquarters for the French Revolution, accommodating Robespierre and his supporters. Ironically, it was there that Robespierre himself was arrested at the end of the infamous “Rule of Terror” period, during which anyone opposing the revolution was sent to the guillotine.

Likewise, in 1871, the City Hall once again hosted headquarters, but this time for the Paris Commune. When their defeat became imminent and the French army closed in on the building, the Communards set fire to it completely destroying everything inside. The exterior was then rebuilt following the original design, but the interior had to be created anew.

Outside the building is decorated with 108 statues of famous Parisians like Voltaire, Rousseau, Charles Perrault, Jean-Baptiste Pigalle, and others. The other thirty statues there represent French cities. The clock at the central tower is also adorned with statues – several female sculptures depicting the river Seine, the city of Paris, the “Work” and the “Education”.

While public access to the City Hall is generally restricted, there are two rooms in the building constantly allocated to art exhibitions. One of them usually features photography and the other one – art in general. Also, there are almost always some cultural events or exhibitions taking place outside, in the square in front of the building. Still, the main attraction for tourists visiting the Paris City Hall is, undoubtedly, its architecture!
Image by Rolldi on Wikimedia under Creative Commons License.