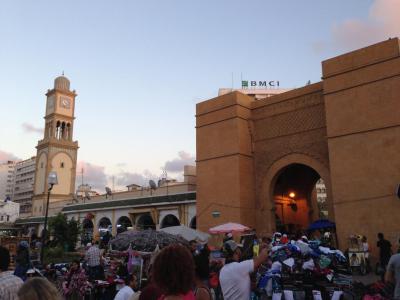 Charles Martial Joseph Dessigny, it has been said, had a sort of obsession. He really liked towers. He was a military man, Army of France. He'd had served in Ain Sefra, in Algeria, where he had built a fine clock tower. When he was done with the artillery bombardment in Casablanca, he would build another tower, just like the one before.

He occupied Casablanca, took charge of the French department of public facilities and ordered the construction of the tower. He acted so fast the tower was completed before 1912, when the French Protectorate of Morocco became official. It was brilliant. A tower to rival the minarets, it signified the dawn of French power in Morocco.

The tower looked very like a minaret. It was square-based, like a minaret. It had four round clock faces with roman numerals. Over the years the tower became unstable. It was demolished in 1948. But not to worry. A duplicate tower was built nearby in 1993.

Walking through the old city between central Casablanca and the mosque of Hassan II, in the northeast corner of United Nations Square, discover the copy of Dessigny's beloved tower. Next to the tower is the Old Medina Gate. Most shops or stalls to be found will be close to the gate. The Medina has undergone much renovation and is now mainly residential.
Image Courtesy of Flickr and Andrew Nash.