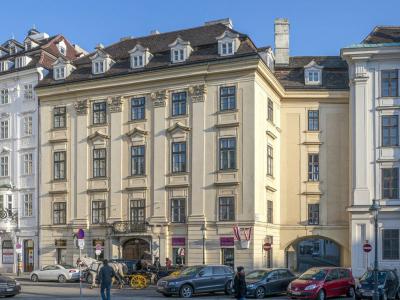 In the second week of October 1762, shortly after the Venetian patrician family Collalto acquired this palace on Schulhof Strasse, a young music prodigy named Wolfgang Amadeus Mozart performed with his sister Nannerl in its original splendor as part of their maiden trip to the city. Mozart himself was only six years old and it was his first public engagement. The host, Count Collalto, was so impressed by the young talent that he even published a poem afterwards in homage to the event. A few days later, Mozart would famously go on to perform for Empress Maria Theresa at the Schönbrunn Palace.

Unfortunately, the palace is not to the public, but a plaque outside commemorates the historic occasion: "It was in this house in the 2nd week of October 1762 that Wolfgang Amadeus Mozart (1756-1791) made his first performance in the city that would become his home and destiny (The Viennese Mozart Community, 1956)".

Tip:
Take a walk around the back of the nearby church (Kirche am Hof) into Schulhofplatz to look at the tiny restored shops which occupy the space between the buttresses of the Gothic choir. In Bognergasse, to a side of the church, is the Engel Apotheke (pharmacy) at No. 9, with a Jugendstil (Art Nouveau) mosaic depicting winged women collecting the elixir of life in outstretched chalices.
Image by Thomas Ledl on Wikimedia under Creative Commons License.