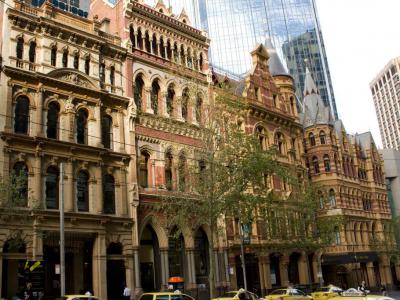 One of the city's major streets, Collins Street is part of the original city grid made in 1837. The city grid is named for surveyor Robert Hoddle. True to his specifications, the street is exactly one mile long and one chain (99 feet) wide. It is named for the Lieutenant-Governor of Van Diemen's Land, as Tasmania was known then. Lieutenant-Governor David Collins led settlers to found Sorrento in 1803, which was the first British settlement in Australia outside of Sydney.

The east end of the street is known locally as the Paris End since the historic buildings, trees, sidewalk cafes, and small boutiques are reminiscent of France. Near Queen Street, the west end of the street has been home to the financial district since the 1800s. The retail heart of the area is the Block Arcade, which runs between Swanston and Elizabeth Streets.

The first trees planted here were the elm trees, which were added in 1875. Trams were installed in 1885 and were initially cable-drawn until the system was electrified in 1930. Many historic buildings from Melbourne's early boom times were unfortunately destroyed in the 1950s and 60s as the area went through an extensive period of redevelopment.

Notable Victorian buildings like the Collins Street Baptist Church, The Scot's Presbyterian Church, and the St. Michael's Uniting Church are still present. Alston's Corner, designed by Nahum Barnet in 1914, is an excellent example of Edwardian architecture. At the financial end of the street, you'll also see some Victorian gothic buildings known as the "Cathedrals of Commerce."
Image by Rexness on Flickr under Creative Commons License.