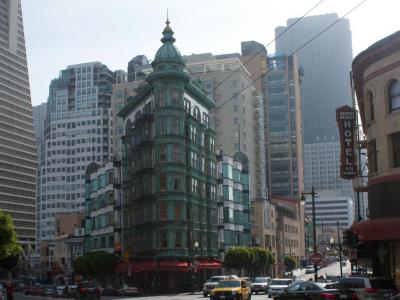 Also known as the Sentinel Building, the Columbus Tower had work on it started in 1905 with directions and money pouring in from Abe Reuf, a lawyer and politician of San Francisco. The earthquake of 1906 and the fire that followed just left the steel framing of the building. The new edifice was completed in 1907 with a copper cladding, and the top floor housing Reuf’s offices. Reuf himself, however, was convicted of bribery in 1909 and given a 14-year sentence. By the time he was released, the copper had oxidized and the building had turned green as we see it today.

Legend has it that the Caesar salad was first served at a restaurant called ‘Caesar’s’, located in this building, which was closed down in accordance with the Eighteenth Amendment of the United States Constitution in 1919. In the 1960s, ‘The Kingston Trio’ owned the building and recorded their songs in the studio they built in the basement. By the 70s, the building had started to fall apart, when Francis Ford Coppola, director of Godfather movies, came to its rescue. Coppola bought the building, renovated it and set up his American Zoetrope studio in here. Today Columbus Tower is landmark number 33 on the list of San Francisco landmarks, and also has a bistro called Zoetrope Café that sells wine from the Napa Valley.
Image Courtesy of Flickr and sw77.
Sight description based on Wikipedia.