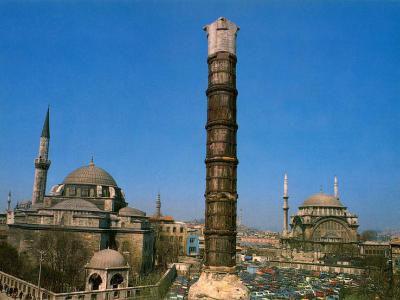 The monumental Column of Constantine was constructed on the orders of the Roman emperor Constantine the Great in 330 AD to commemorate the declaration of Byzantium as the new capital city of the Roman Empire.

Located along the old Road to the Imperial Council between the Hippodrome of Constantinople (now Sultanahmet Square) and the Forum of Theodosius (now Beyazıt Square), the column was 50 meters tall on its erection and had the statue of Constantine (in the figure of Apollo) carrying an orb that allegedly contained a fragment of the True Cross. At the foot of the column was a sanctuary which contained even more relics, allegedly from the crosses of the two thieves who were crucified with Jesus Christ at Calvary, the baskets from the loaves and fishes miracle, an alabaster ointment jar belonging to Mary Magdalene and used by her for anointing the head and feet of Jesus, and a wooden statue of Pallas Athena from Troy.

A strong gale in 1106 AD felled the statue and three of the column's upper cylinders. Some years later, Byzantine emperor Manuel I Komnenos (reigned 1143-1180) placed a cross on top in place of the original statue and added a commemorative inscription that read "Faithful Manuel invigorated this holy work of art, which has been damaged by time". Bronze wreaths once covered the joints between the drums, but these were taken by the Latin Crusaders who plundered the city during the Fourth Crusade in 1204. The cross was removed by the Ottoman Turks after the fall of Constantinople in 1453.

Earthquakes and a fire in 1779 destroyed the neighborhood surrounding the column, leaving it with black scorch marks and earning it the name 'Burnt Column'. It was then restored by Sultan Abdülhamid I, who had the present masonry base added. The column's original platform is 2.5 meters (about 8 feet) below ground.
Image Courtesy of Flickr and SALT Research.