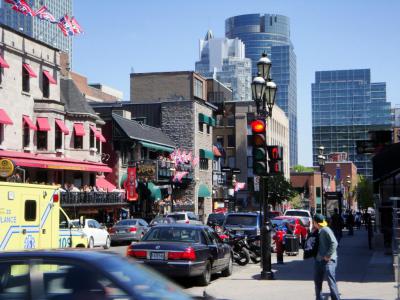 Crescent Street (rue Crescent) is a southbound street located in downtown Montreal, Quebec. Running perpendicular to Saint Catherine Street, Crescent Street descends from Sherbrooke Street south to René Lévesque Boulevard. North of De Maisonneuve Boulevard, one can find many luxury boutiques and art galleries in a Victorian architectural setting. To the south of de Maisonneuve the concentration of nightclubs, bars and restaurants makes Crescent Street one Montreal's most well-known nightlife strips. The street which opened around 1860, was originally in the form of a crescent, and was located just north of Dorchester Boulevard. Crescent Street is home mostly to pubs and restaurants. One such business is the popular Lebanese restaurant Boustan, located north of De Maisonneuve Boulevard. Crescent Street was also home to the famous Russian restaurant The Troika which closed in April 2012 and has now been replaced by the Brass Door Pub & Grill. Crescent street merchants hold an annual street fair, known as the Grand Prix Festival, the week prior to the Formula One Canadian Grand Prix with open air free concerts, terrasses for the bars into the streets, street vendors, and racing displays. This festival un-officially kicks off Montreal's festival season. Crescent Street is alive with culture and nightlife, a place where locals and tourists gather for shopping, great food, and entertainment. The place is also visited a lot by famous people and by those who enjoy all kind of nightlife. With its hospitality, lodging, and a wide selection of gathering places, Cresent Street is the center of excitement in Montreal.
Image by Shawn Carpenter on Flickr under Creative Commons License.
Sight description based on wikipedia