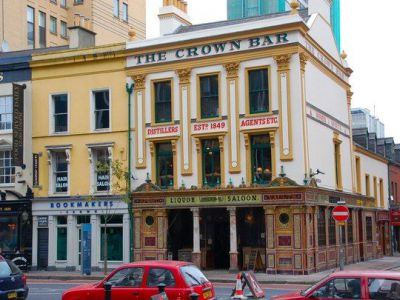 The Crown Liquor Saloon is a public house located on Great Victoria Street. Refurbished to a high standard in 1885, it is an outstanding example of a Victorian gin palace, and is one of Northern Ireland's best-known pubs.

Originally opened by Felix O'Hanlon and known as The Railway Tavern, the pub was then bought by Michael Flanagan. Flanagan's son Patrick renamed and renovated the pub in 1885. The Crown owes its elaborate tiling, stained glass and woodwork to the Italian craftsmen whom Flanagan persuaded to work on the pub after hours. These craftsmen were brought to Ireland to work on the many new churches being built in Belfast at the time. It was this high standard of work that gave the Crown the reputation of being one of the finest Victorian Gin Palaces of its time.

In 1978 the National Trust purchased the property and three years later completed the renovation to restore the bar to its original Victorian state. Further restoration by the National Trust was done in 2007. This work is the subject of a BBC Northern Ireland documentary entitled Jewel in the Crown, first screened early 2008.

A recognizable landmark of Belfast, the pub has featured as a location in numerous film and television productions, such as David Caffrey's Divorcing Jack in 1998 and as far back as Carol Reed's 1947 film Odd Man Out. The Crown has been given a Grade A Listed Building status by the Environment and Heritage Service.

The building exterior is decorated in polychromatic tiles. This includes a mosaic of a Crown on the floor of the entrance. The interior is also decorated with complex mosaics of tiles. The red granite topped bar is of an altar style, with a heated footrest underneath and is lit by gas lamps on the highly decorative carved ceilings.

The Crown has ten booths, or snugs. Built to accommodate the pub's more reserved customers during the austere Victorian period, the snugs feature the original gun metal plates for striking matches and an antique bell system for alerting staff. Extra privacy was then afforded by the pub's etched and stained glass windows which feature painted shells, fairies, pineapples, fleurs-de-lis and clowns.
Image Courtesy of Wikimedia and Aubrey Dale.
Sight description based on Wikipedia.