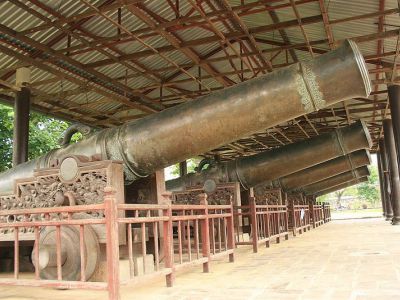 Cửu Vị Thần Công (Nine Holy Cannons) are a famous landmark of Hue and a symbol of the Nguyen’s Dynasty grandeur. The cannons are also named “Nine Gods” and they were manufactured in 1803 and 1804 at the request of Emperor Gia Long. Today they are considered masterpieces of bronze art. Originally the cannons were placed at the main entrance to the Imperial City, at the Moon Gate, but during the reign of Emperor Khai Dinh they were moved to their current location, on both sides of the Flag Tower. Each cannon is 5.1 m in length and weighs about 17,000 pounds. On each cannon its weight is engraved. Four cannons are named after the seasons and the others are named after the five main elements (metal, wood, water, fire, and earth). The cannons were never in use; they are only symbolically protecting the Imperial City.
Image by Lưu Ly on Wikimedia under Creative Commons License.

Want to visit this sight? Check out these Self-Guided Walking Tours in Hue. Alternatively, you can download the mobile app "GPSmyCity: Walks in 1K+ Cities" from iTunes App Store or Google Play. The app turns your mobile device to a personal tour guide and it works offline, so no data plan is needed when traveling abroad.

To to get the maximum of your stay in Hue, take time to discover its beautiful historical sites dating back to when the city was the seat of the Nguyen imperial dynasty and also the capital of Vietnam (until 1945). This self-guided walk includes a number of historic sites, such as the Imperial City, palaces and shrines, as well as the Forbidden Purple City (former imperial residence), among other...  view more

Imperial City is Hue's famous landmark that was founded in 1804. It is situated within the Hue Citadel. Here are located many temples for worshiping the deceased Emperors and members of their families. Inside the Imperial city was built the Forbidden Purple City where only members of the royal family were allowed. The Imperial City is protected by UNESCO and as a result many buildings that...  view more