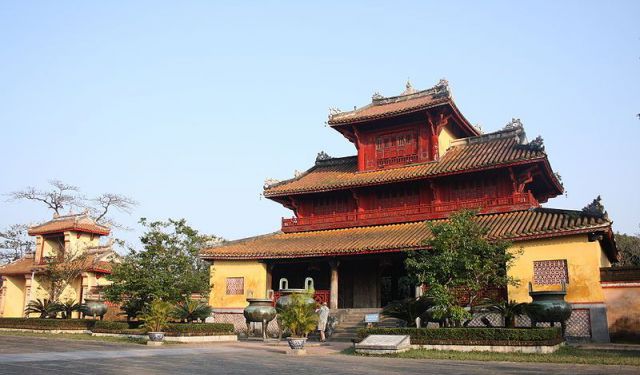 The Kings of the Nguyen Dynasty built their feudal capital along the fertile banks of the Perfume River, whose steady flow, centuries on, still sets up a languid pace that the rest of the city is happy to follow.

Situated within the walls of the Royal Citadel, The Imperial City in Hue is one of, if not the most prominent landmark in Vietnam, renowned for its wonderful collection of oriental architecture. Constructed in 1803 under Emperor Gia Long, it served mostly ceremonial function during the French colonial period.

After the end of the monarchy in 1945, the complex suffered heavy damage during the Indochina and then Vietnam wars and was largely neglected throughout the 1980s. Many of the former royal buildings, museums, libraries, and Buddhist shrines, including the Temple of Heaven, were subsequently rebuilt, and in 1993 earned Hue the title of a UNESCO World Heritage Site.

The Site mainly comprises the Citadel, complete with the Imperial City and the Forbidden Purple City (once the emperor's home) separated by seven barriers, plus some other related buildings in the immediate vicinity. At the entrance to the Citadel is the Ngo Môn gate, where the emperor announced his decisions; the Palace of Supreme Harmony, throne room with purple and yellow lacquered columns; and the Imperial Museum which houses royal clothing, furniture and porcelain. The Forbidden Purple City also includes the Royal Theater where traditional Vietnamese performances are still given today.

To get acquainted with the legacy of Vietnam’s last royal family and explore the surviving evidence of their 143-year long reign, follow this self-guided walking tour.
Image Courtesy of Wikimedia and Liblanc.
How it works: Download the app "GPSmyCity: Walks in 1K+ Cities" from iTunes App Store or Google Play to your mobile phone or tablet. The app turns your mobile device into a personal tour guide and its built-in GPS navigation functions guide you from one tour stop to next. The app works offline, so no data plan is needed when traveling abroad.

Cửa Ngọ Môn (Meridian Gate) is the most important of the five gates that lead to the Imperial City which was used only by Emperors, while the servants entered through other two gates, situated on the left and right sides of the Noon Gate. The U-shape gate is 5.2 meters tall at its highest point and is a two-story construction, where the pavilion on the second floor was only for the Emperor’s seat. Unfortunately the Noon Gate was almost destroyed during the war, but due to great work done by the restoration team you can admire this architectural masterpiece today.
Image Courtesy of Wikimedia and Lưu Ly.
2

Forbidden Purple City is said to be built after the project of the Forbidden City in Beijing. Nowadays haplessly most of the Forbidden Purple City stands completely damaged, due to the Tet Offensive; the spared remains are a wistful recall of the huge buildings that once stood there. Today the city is one of the UNESCO sites and the remaining buildings and those that escaped complete destruction have been lovingly restored.
Image Courtesy of Flickr and Mig Gilbert.
3

Editor's note:
After over a century, Thai Hoa Palace have been dismantled for major restoration in 2022. The restoration project that costs around VND150-billion ($6.53 million) is expected to complete in August 2025. During the restoration, the image of Thai Hoa Palace before the dismantling will be displayed around the protective fence for visitors to admire.

Image Courtesy of Wikimedia and Liftold.
4

Tả Vu và Hữu Vu (Ta Vu and Huu Vu) are two buildings situated opposite each other, just at the entrance to the Forbidden Purple City from the Imperial City. These buildings were built in the early 19th century and renovated in 1899. Both have a rectangular shape and are the same size, but they differ in ornaments and in function. The last restoration of the Huu Vu was in 1977 and of the Ta Vu in 1988.
Image Courtesy of Wikimedia and Lưu Ly.
5

Triệu Miếu (Trieu Temple) is situated at the southeast part of the Imperial City, near Cửa Hiền Nhơn (Hien Nhon Gate). The temple was built for the worship of Trieu To and his wife, the first ancestors of the Nguyen Dynasty. It was erected in 1804. The temple was seriously damaged during the war and its restoration was possible only in 1984. Today it is a fine example of Vietnamese architecture of the 19th century.
Image Courtesy of Wikimedia and Kiennguyen546193.
6

Duyệt Thị Đường (Royal Theater) is located southeast of the Forbidden Purple City. It was built in 1826 during the seventh year of Emperor’s Minh Mang reign, only for the members of the royal family. This Royal Theater is the oldest working theater in all of Vietnam. The building underwent a complete restoration and was opened to the public only in 2004. The interior of the theater will fascinate you as it was reproduced exactly as the original one. Today you can imagine yourself emperor or at least one of the royal family members, and see a play in the Royal Theater.
Image Courtesy of Flickr and wwhyte1968.
7

Cửa Hòa Bình (Peace Gate) is located in the north part of the Imperial City. It is the only gate that leads directly from Hue Citadel to the Forbidden Purple City. The gate was built in 1804 under the reign of Gia Long together with the biggest part of the Imperial City’s constructions. It was called the “praying gate” but in 1833 it was changed to the “peace gate.” The gate was seriously damaged during the war and was completely restored in 2004.
Image Courtesy of Flickr and Greg Willis.
9

Lầu Tứ Phương Vô Sự (Lau Tu Phuong Vo Su) is one of the 4 crescent emplacements of the Imperial City and is the only one located in the Forbidden Purple City. It was originally built in 1804, at the same time with the East, South and West crescent emplacements but soon it was abandoned and ruined. Under the reign of Emperor Khai Dinh, in 1923 the North crescent emplacement was built from scratch, mixing Asian and European architectural styles. Unfortunately, it only existed 45 years; in 1968 it was seriously damaged. In 2010 the Lau Tu Phuong Vo Su has opened its doors, after 20 months of hard restoration work, so that today you can admire this architectural masterpiece.
Image Courtesy of Wikimedia and Trần Anh Đức.
10

Cung Trường Sanh (Grand Queen Mother’s Residence) is also known as Longevity Palace and it was built in the North pat of the Imperial City during the first year of Emperor’s Minh Mang reign (1821). It is an ensemble of buildings that served as the residence for the Emperor’s mother and was built on a former park territory. The most recent restoration work was completed in 2007, so today you can visit the Grand Queen Mother’s Residence.
Image Courtesy of Wikimedia and Vinhtantran.
11

Điện Thọ Ninh (Ninh Dien Tho) is situated in the northwest part of the Imperial City, near the main Queen Mother’s Residence. The Ninh Dien Tho was built in 1803 by the Emperor Gia Long and was usually used as a dining place for the Emperor’s mother. Ninh Dien Tho and Dien Tho House, located near it, create together one ensemble of buildings that are located inside a square shaped fenced territory of almost 20.000 m2, which could be entered only through 6 gates.
Image Courtesy of Wikimedia and AJ Oswald.
12

Cung Diên Thọ (Dien Tho House), located in the northwest of the Imperial City, was built in 1803 for the daily activities of the Queen Mother. The name of the house means “long life,” which was a wish of longevity for the Emperor’s mother. The Dien Tho House is situated near the Hung Mieu Temple and can be reached through its south gate. The house is a brick rectangular one-story building with 4 columns in front of it. Inside you’ll find well preserved ornaments and unique objects.
Image Courtesy of Wikimedia and Lưu Ly (thảo luận).
13

Cửa Chương Đức (Chuong Duc Gate) is one of the five gates than allow entrance to the Imperial City from the Citadel. It was built in 1804. The gate leads to the southwest part of the city, right to the Hưng Tổ Miếu (Temple of the Resurrection). Thought it is not the main gate, it is the most beautiful one as it underwent a complete restoration. Today you can admire the beauty of this architectural masterpiece that will impress you with a huge number of unique details.
Image Courtesy of Flickr and robertlafond2009.
14

The temple is situated opposite to the Thế Tổ Miếu (Temple of the Generations), near to the Cửa Chương Đức (Chuong Duc Gate). The original Hưng Tổ Miếu (Temple of the Resurrection) was built in 1804with the purpose of worshiping Nguyễn Phúc Luân and his wife Nguyễn Thị Hoàn (the parents of the Emperor Gia Long). Unfortunately, the temple was almost completely destroyed during the wars. What you see today is a completely rebuilt construction that was completed in 1951.
Image Courtesy of Wikimedia and Suicasmo.
15

Thế Tổ Miếu (Temple of the Generations) was built in 1821 by Emperor Minh Mang to worship 10 Emperors from the Nguyen Dynasty. The temple is located in the west part of the main Cửa Ngọ Môn (Noon Gate), between Hiển Lâm Các (Pavilion of the Glorious Coming) and Hưng Tổ Miếu (Temple of the Resurrection). During all ceremonies held inside the temple, women were forbidden to enter. In 1959 three more altars dedicated to Emperors Hàm Nghi, Thành Thái và Duy Tân were added to the seven existing altars. Thế Tổ Miếu (Temple of the Generations) was only slightly damaged during the war so today you can admire the construction as it was originally built.
Image Courtesy of Wikimedia and LÊ TẤN LỘC.
16

The Nine Dynastic Urns are located between Hiển Lâm Các and Thái Tổ Miếu in the Imperial City. Each urn symbolizes one dynasty of Vietnam’s Emperors, from the To Cao Emperor to the Huyen Emperor. All of the Dynastic urns are made from bronze. On each of them are engraved the 17 most important authentic Vietnamese symbols of mountains, oceans, stars and more, which together reveal the history of the country. Each urn is unique and differs from others by its weight, height and ornaments.
Image Courtesy of Wikimedia and LÊ TẤN LỘC.
17

Once the seat of the imperial dynasty in the heart of Vietnam, Hue is chock-full of stories. During feudal times, for nearly 150 years – from 1802 to 1945, the city served as the national capital. The royal lifestyle and customs have had a strong impact on the lifestyle of locals, and this impact can still be felt today.

First cited about 200 BCE as the seat of the Chinese military authority...  view more

Hue attracts tourists with its architectural landmarks, but it also offers an unforgettable shopping experience. Shopping in this wonderful city is an excellent opportunity to get closer to the Vietnamese culture and its traditions. In Hue you will find a great variety of local crafts and souvenirs that should be on your shopping list. Take this self-guided shopping tour to visit the most popular...  view more