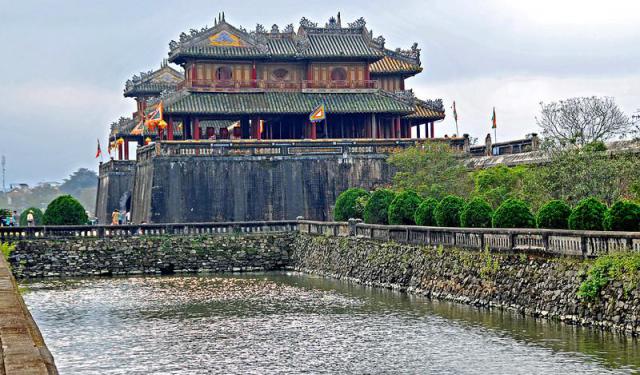 Once the seat of the imperial dynasty in the heart of Vietnam, Hue is chock-full of stories. During feudal times, for nearly 150 years – from 1802 to 1945, the city served as the national capital. The royal lifestyle and customs have had a strong impact on the lifestyle of locals, and this impact can still be felt today.

During the French colonial period, in the second half of the 19th century, Hue was part of the Annam protectorate, and later, under Japanese occupation, from 1940 to 1945, became the seat of a provisional administrative committee of non-communist Vietnamese. In 1949, the newly-declared state of Vietnam chose Saigon as their capital, and thus Hue lost its historic function.

Since the end of World War II, the city endured several upheavals, suffering early damage during the First Indochina War (1946–54), followed by severe civil disturbances in 1963 and again in 1965. During the 1968 Tet Offensive of the Vietnam War, many of the former royal buildings were damaged, but subsequently rebuilt.

In recent years, millions of people have visited the city annually, attracted by its numerous historic monuments, some of which still undergo restoration. Among the most prominent ones, worth checking out, are the Luong Dinh Welcome Pavilion and the Cửa Quảng Đức gate in the western part of the Imperial City. Another famous landmark and a symbol of the Nguyen Dynasty’s grandeur is the Cửu Vị Thần Công (Nine Holy Cannons).

The Palace of Supreme Harmony – Điện Thái Hoà – is situated just behind the Cửa Ngọ Môn gate in the most important court of the Citadel. Outside the fortress, straddling the river, is the Truong Tien Bridge, a distinctive symbol of Hue. And if you want to try some of the most delicious street food in town, make sure not to miss the Đông Ba market.

To get the maximum of your stay in Hue and discover its beautiful locations, take this self-guided walking tour.
Image Courtesy of Flickr and Dennis Jarvis.
How it works: Download the app "GPSmyCity: Walks in 1K+ Cities" from iTunes App Store or Google Play to your mobile phone or tablet. The app turns your mobile device into a personal tour guide and its built-in GPS navigation functions guide you from one tour stop to next. The app works offline, so no data plan is needed when traveling abroad.

Nghinh Lương Đình (Luong Dinh Welcome Pavilion) was built in 1852 as a rest place for the Emperor while fishing. It situated on the Perfume River shore just opposite the Phu Van Lau. The pavilion is brick with a tiled roof, and from the pavilion to the water are 13 steps. Recently Luong Dinh Welcome Pavilion was restored and today can be admired by anyone. From here opens a great view on the Perfume River.
Image Courtesy of Wikimedia and Lưu Ly.
2

Phu Văn Lâu (Phu Van Lau) was built in 1819 under the reign of Emperor Gia Long and was used as a place for announcing the Emperor’s important edicts or the results of examinations held by the court. In 1829 the square in front of it was the site for battles held between elephants and tigers, and Phu Van Lau was where the Emperor watched the fights. Phu Van Lau is a two story construction, and in front of it are situated two small brass cannons facing each other.
Image Courtesy of Wikimedia and Xiquinho Silva.
3

Cửa Quảng Đức (Quang Duc Gate) is the west gate that leads to the Imperial building and it was built in 1804. In order to enter the gate you have to walk on the Ho Thanh Bridge over the moat that surrounds the Imperial City. There is only a one way road for the vehicles that leads outside the Citadel, and in order to get in you have to use the Ngan Gate. The Quang Duc Gate was slightly damaged during the war but it is in use.
Image Courtesy of Flickr and manhhai.
4

Cửu Vị Thần Công (Nine Holy Cannons) are a famous landmark of Hue and a symbol of the Nguyen’s Dynasty grandeur. The cannons are also named “Nine Gods” and they were manufactured in 1803 and 1804 at the request of Emperor Gia Long. Today they are considered masterpieces of bronze art. Originally the cannons were placed at the main entrance to the Imperial City, at the Moon Gate, but during the reign of Emperor Khai Dinh they were moved to their current location, on both sides of the Flag Tower.

Cửa Ngọ Môn (Meridian Gate) is the most important of the five gates that lead to the Imperial City which was used only by Emperors, while the servants entered through other two gates, situated on the left and right sides of the Noon Gate. The U-shape gate is 5.2 meters tall at its highest point and is a two-story construction, where the pavilion on the second floor was only for the Emperor’s seat. Unfortunately the Noon Gate was almost destroyed during the war, but due to great work done by the restoration team you can admire this architectural masterpiece today.
Image Courtesy of Wikimedia and Lưu Ly.
6

Editor's note:
After over a century, Thai Hoa Palace have been dismantled for major restoration in 2022. The restoration project that costs around VND150-billion ($6.53 million) is expected to complete in August 2025. During the restoration, the image of Thai Hoa Palace before the dismantling will be displayed around the protective fence for visitors to admire.

Image Courtesy of Wikimedia and Liftold.
7

Bảo tàng Mỹ thuật Cung đình Huế (Royal Fine Arts Museum of Hue) was founded in 1885 and was situated in the Emperor’s residence. However, in 1909 it moved to its present spot. The museum exhibits pottery and chinaware collections, as well as the Emperor’s personal objects, and is entirely dedicated to the Nguyen Dynasty. The museum’s building is also of great interest as it is a one story wooden building that was erected in 1845.
Image Courtesy of Wikimedia and Lưu Ly.
9

There several bridges situated on the Huong Stream, but just Truong Tien Brigde was chosen as a symbol of Hue town. The metalwork bridge Trang Tien in the east of the Capital started to be erected in 1897 and was finished in 1899. The arch is about 400m long of 6 spans". It was affected by a horrible typhoon in 1904, which left 6 spans of the bridge broken. The bridge was rebuilt in 1906. Since then the Truong Tien Bridge has been repaired many times again.
Image Courtesy of Wikimedia and ntt.
10

Dong Ba Market is a famous landmark and is located in Citadel Hue. It is a great place to see the everyday life of local people, as well to purchase everything you’d think of. Dong Ba Market is the oldest market in Hue - it was built in 1885 and is also the largest food market in the city. Here you can try exotic fruits and vegetables, as well as many local delicacies. The market offers a great range of souvenirs and crafts.
Image Courtesy of Flickr and Jos Dielis.

Hue attracts tourists with its architectural landmarks, but it also offers an unforgettable shopping experience. Shopping in this wonderful city is an excellent opportunity to get closer to the Vietnamese culture and its traditions. In Hue you will find a great variety of local crafts and souvenirs that should be on your shopping list. Take this self-guided shopping tour to visit the most popular...  view more

The Kings of the Nguyen Dynasty built their feudal capital along the fertile banks of the Perfume River, whose steady flow, centuries on, still sets up a languid pace that the rest of the city is happy to follow.

Situated within the walls of the Royal Citadel, The Imperial City in Hue is one of, if not the most prominent landmark in Vietnam, renowned for its wonderful collection of oriental...  view more