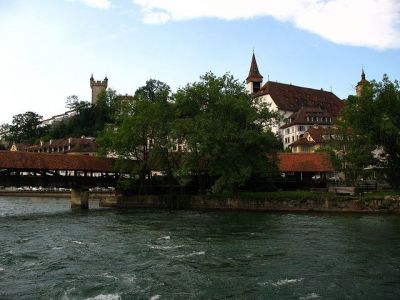 The easternmost of the nine sister-towers in the historic Mussegg Wall of Lucerne is also the smallest. This slender structure is only 27.35 meters high, with 5.4 by 7.3 meters in footprint, and has the side walls of 1.4-meter thickness. Its south wall is only 0.6 meters thick.

In addition to the name Dächliturm, which literally means the “tower with a small roof”, it was also called once the third Holdermeyerturm or Chutzeturm (Signal Tower).

The exact year of its construction is unknown – tentatively 1449, which is subject to further archaeological examination.

The tower's main highlight is the pyramid-shaped roof, considered to be the oldest of all the nearby tower rooftops – built in the spring of 1449 at the earliest. Originally – just like several other towers in the Musegg Wall – it was a half-tower, with the south facade open to the city bricked up only in 1728. Subsequently, the tower interior was completed in 1731.

During the Thirty Years' War, in the first half of the 17th century, amid the terror reigning over Europe, this small tower served primarily as a fortification post against enemy attack from water – the shooting holes facing the lake. Additionally, it was also used as a storage for gunpowder, which luckily never came to be needed.

At the more peaceful times, towards the end of the 19th century, the Dächliturm was briefly rented by a glass painter, and then – from 1936 to 1961 – had its lower part occupied by the museum of commerce. Also, partially from 1936, and then wholly since 1970, it has been rented by the Swiss Association of Master Carpenters who have been looking after this magnificent building to this date.
Image Courtesy of Flickr and thisisbossi.