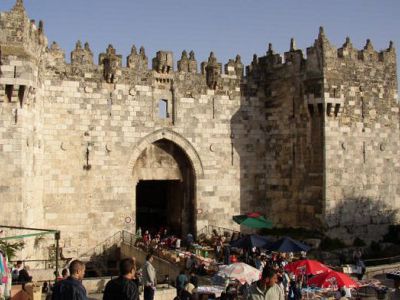 One of the main entrances to the Eastern part of Old Jerusalem, this gate is named after the Syrian capital which lies some 135 miles (or 220 kilometers) up north. The structure has remained pretty much intact since the time it was built, between 1537 and 1542, under the reign and direct supervision of Ottoman sultan Suleyman the Magnificent. The size of the gate, however, resulted from the work commissioned centuries before that by another ruler – Roman emperor Hadrian – and it was a column, owing to which is yet another name for this gate, “Bab al-Amud” (Gate of the Column).

Today, this is by far one of the busiest and most colorful spots in the Old City. In many ways, this gate symbolizes a sort of opening to a microcosm of the Palestinian world. Here, vendors heading to and from the Old City bring their goods, and the life boils with activity pretty much as it has done for centuries before.

A sign of modern day reality, however, is the presence of the Israeli soldiers standing guard on the steps of the nearby buildings. Still, the area is dominated primarily by the vendors offering herbs, fresh produce and other goods to the passers-by. Local women are distinctively famous for wearing embroidered dresses that are a part of their dowry and identity.

Why You Should Visit:
This is one of the Old City's prettiest gates with the castellated wall. Truly majestic!

Tip:
The gate area is super busy, if not intimidating, towards the end of Ramadan. When it's Friday in Ramadan, DO NOT try to exit the gate, for it will be like swimming against the tide!
Right outside the gate there are few stalls selling all kinds of fruits and vegetables, as well as dry and canned goods and other household stuff. The prices here are quite affordable and the produce is always fresh.
Image by Herwig Reidlinger on Wikimedia under Creative Commons License.