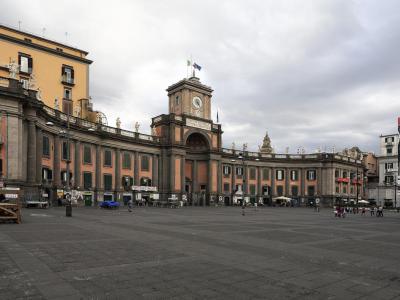 The Piazza Dante or Dante Square in Naples is dominated by the statue of the renaissance poet, Dante Alighieri. It is a centrally located square in the city.

The Piazza Dante was once the site of a large marketplace. At the time, it was called the Largo del Mercatello or Market Square. The square was redesigned and renovated by the architect, Luigi Vanvitelli in 1765. After the modifications, it was called the Foro Carolina after Maria Carolina of Austria, the consort of the then reigning King of Naples, Ferdinand IV. After the unification of Italy in 1871, the statue of Dante Alighieri by sculptor, Tito Angelini was erected here in 1872.

The Piazza Dante today is a popular square for both locals and tourists. It is within easy reach of most of the important monuments in Naples and lies near the new first line of the underground station. There is also a well known food market at the Rione della Pignasecca nearby. The original modifications by Luigi Vanvitelli including a semicircle of highly decorated columns with statues are still located on Piazza Dante and form the western side of a boarding school. It is a popular venue for family activities in Naples.
Image by Inviaggiocommons on Wikimedia under Creative Commons License.