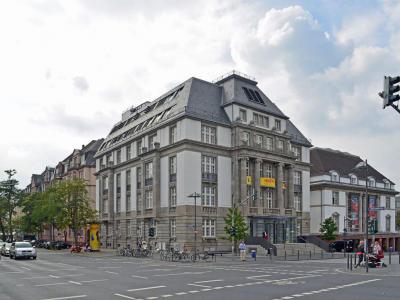 On the south bank of River Main is the 'Museumsufer', the name of a landscape of museums in Frankfurt. Among these, the German Film Museum, founded in 1949, is the oldest film repository in West Germany.

The German Film Museum is a celebration of the most original art form of the 20th century. There are five permanent exhibits portraying the history of film from the Camera Obscura to the work of the Lumiere Brothers. Other sections showcase the language of film and sound in relation to movies. The museum allows visitors to go behind the scenes and view how movies are made. These exhibits include replica studios, background sounds and effects, special effects and artistic developments used in modern cinematography.

Visitors can browse the vast archives that preserve old films, cameras and a wealth of objects that relate to cinema production and technology; they can take part in a car chase or fly in a magic carpet courtesy of the trick technology used in movies. The museum also holds changing exhibitions and themes related to German cinema and has a large library that is open to the public. The on-site movie theatre that screens old and classic pictures is accessible via a separate entrance.

Why You Should Visit:
The 2nd floor – the one exploring how movies are made – is fascinating, especially since there are lots of displays where you get to play around with various effects.
The exhibits – including an amazing collection of original vintage film cameras! – have English guides so no worries if you aren't fluent in the Deutsch language.

Tip:
Make sure you see the special/temporary exhibit during your visit, whatever it may be (for a small extra fee).
There's a very sleek café in the lobby filled with other movie fans with whom you can start up a conversation.