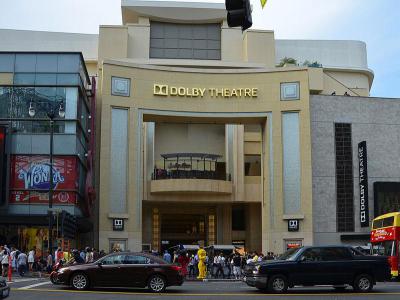 The Dolby Theatre (formerly known as the Kodak Theatre) on Hollywood Boulevard is found in the Hollywood and Highland Center shopping mall and entertainment complex. Even though this might be the first time you have come here for a concert, you will have seen this theater many times before on television, most certainly.

Usually, when it’s on TV, the shops on each side of the theater are delicately hidden behind swathes of red cloth and there is a long red carpet leading to the lobby, along which your favorite (and not so favorite) stars wave to huge crowds as they make way to the front doors. This theater has hosted the Academy Awards Ceremony each year since 2002, and is best known for this event.

Built in 2001 by David Rockwell, it was sponsored, especially for the Oscars, by the Eastman Kodak Company, and holds one of the largest stages in the United States, measuring 34 meters wide by 18 meters deep. Columns in the lobby all bear the names of the lucky Oscar winners dating all the way back to 1927.

On May 1, 2012, it was announced that the venue would be renamed the Dolby Theatre, after Dolby Laboratories signed a 20-year naming-rights deal. Dolby updated the sound system first by installing Dolby Atmos. They plan to continue updating the auditorium with newer technologies as they become available.

The theater is rented to the Academy of Motion Picture Arts and Sciences for weeks before Oscar night. As of 2016, it has also hosted the live shows of America's Got Talent.

Why You Should Visit:
To admire one of the most elegant and sophisticated modern entertainment theaters in the U.S.!
Guided tours are very frequent, last approximately half an hour, and are full of interesting facts and features.

Tip:
You can only book tickets on the day of your tour, so plan ahead.
Tickets are booked on the ground floor box office.
Credit/debit card bookings will require a photo ID.
There are free restrooms on the first floor outside the Dolby.