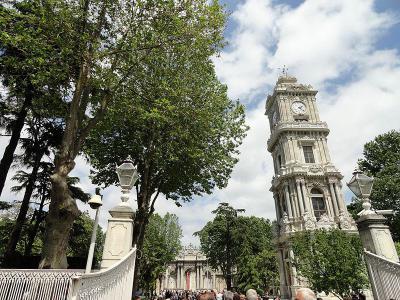 Right across the Treasury Gate of the Dolmabahçe Palace stands a beautiful four-sided clocktower built by Sultan Abdul Hamid II shortly after the palace was completed. The Sultan built clocktowers in many cities for his citizens but as the bells chimed every hour and reminded people of churches, they initially resented them. Their perception changed only upon realizing how helpful these clocks were in organizing their lives.

The tower itself is four floors high. Each story has a different size, embellishment and design, resulting in an interestingly Ottoman Neo-Baroque. Looking closely, you will notice eastern numerals on the faces of the clock and the tughra (calligraphic monogram) of the Sultan on two sides. The Ottomans had a fascination with clocks and here, too, the Sultan got a top-quality French clock installed by the court clock master, Johann Mayer.

Tip:
There is a café in the Clock Tower, and toilets near both entrances. Access inside is only granted if you pay the Palace ticket.