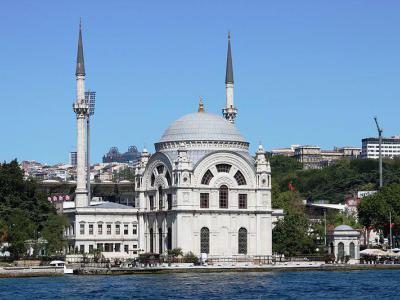 The Dolmabahçe Mosque is one of Istanbul's more modern, opened in 1855. This gives it the benefit of modern industrial building techniques compared with older, traditional mosques. One result is that it is unusually high, with slender minarets and enormous windows letting natural light flood in. A mixture of Baroque and Empire styles, the architecture seems to have been heavily influenced by the British who dominated the area during the period.

In many ways, like the equally elegant modern mosque at Ortaköy, built around the same time, the Dolmabahce Mosque is best enjoyed from the outside, where it lends great character to the Bosphorus. On the inside, you will find artful and dignified interior decoration, mostly in beige and other complementary colors.

Tip:
The entrance is not charged for, but make sure not to step on the carpet with shoes on!
Image Courtesy of Wikimedia and José Luiz Bernardes Ribeiro.