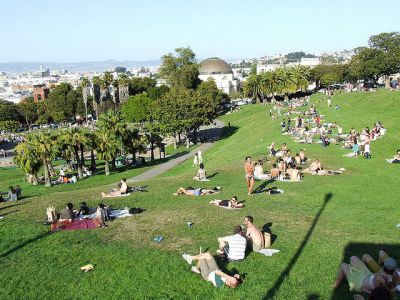 Mission Dolores Park commonly called Dolores Park is a city park located in the neighborhood of Mission Dolores, at the western edge of the Mission District. Dolores Park has been the neighborhood center for cultural, political and sports activities since the 1960s. It has hosted political rallies, festivals, Aztec ceremonial dances, Cinco de Mayo celebrations, and San Francisco Mime Troupe performances. It is also the starting place for the annual San Francisco Dyke March and the Trans March, both are annual marches for LGBT people.

Dolores Park offers several features including many tennis courts, a basketball court, a multi-purpose court, a soccer field, a pissoir, a children's playground, and a dog play area. The southern half of the park is also notable for its views of the Mission district, downtown, the San Francisco Bay and the East Bay. The park is a popular place for relaxing and enjoying a nice view of the San Francisco downtown and the San Francisco Bay.
Image by Loose Charm Productions on Flickr under Creative Commons License.
Sight description based on wikipedia